Dacres on top of the world 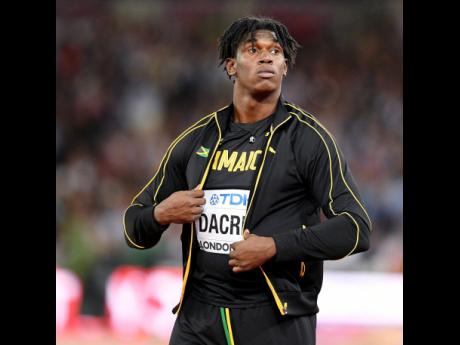 The distance was also a meet record and world leading mark for the Commonwealth Games champion.

Dacres who started his Diamond League season in winning form with 68.51 metres in Rome two weeks ago had a big setback last Thursday at the Oslo meet when he finished eighth with a disappointing 63.85 metres.

However, yesterday he was back to his best after taking the lead with his first attempt of 68.15 metres before his big throw on his second effort. World champion and Diamond League leader Andrius Gudzius of Lithuania was second with a new personal best of 69.59m while Ehsan Hadadi of Northern Ireland, 67.68m, was third.

"It felt great today. I felt strong . The crowd here is really supportive and I like the atmosphere a lot. It was great to be back here at the stadium, and like last year end up with a win . It was good to bounce back from the last competition," an elated Dacres said minutes after his success. He received a diamond for breaking the meet record.

Danielle Williams also hit top form in the women's sprint hurdles. Williams, the 2015 100m hurdles World champion continued her fine 2018 form, with a life-time best of 12.48 seconds to finish behind American Brianna McNeal who won in a world leading 12.38. Alina Talay of Belarus was third in 12.51.

"It was awesome it is my first time here in Sweden and I am really enjoying it. It was not the best execution, I hit a couple of hurdles but it went well and I am happy to do a personal best. Next up for me is the National Championships. I am in great shape," said Williams.