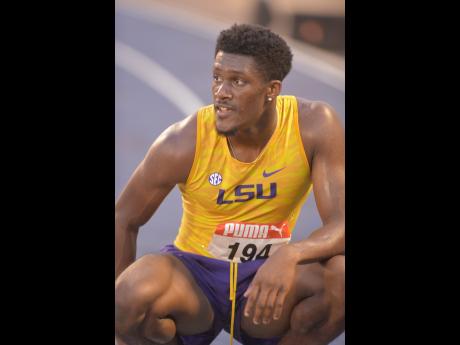 Two years ago at the IAAF World Under-20 Champ-ionships in Bydgoszcz, Poland, Jamaica's Damion Thomas was expected to do something special for his country in the Boys' 110 metres hurdles, after dominating his peers in the United States at the various meets for his high-school team in Florida.

However, he suffered a fall in the semi-final and lost the chance to make a strong impression at the Championships.

Thomas, who just completed his first year at Louisiana State University, where he attained a track scholarship, was on cloud nine on Saturday at the JAAA/Supreme Ventures National Championships after a record-breaking run that has again pointed the spotlight in his direction.

He wrote his name in the record books with an impressive win in the Boys' Under-20 110m hurdles, after a close win over Calabar's Orlando Bennett, posting a personal best of 12.99 seconds. The time equalled the world junior record mark done by Guadeloupe-born French hurdler Wilhem Belocian at the 2014 World Junior Championships held in Eugene, Oregon.

Thomas' mark also broke the previous national junior record of 13.05 seconds done by Tyler Mason at the Championships in Eugene. Thomas is also now at number one on the IAAF's World top list, just ahead of Bennett who stands at number two after his 13.00 seconds done for his runner-up spot on Saturday.

Thomas was extremely pleased with his performance.

"Going into the race, I knew I could do it and it was a blessing, and when I saw the time, the first thing I said was 'Thank God' and asked if the time was legal," said Thomas, asking about his record-breaking performance.

"Competing on the college circuit, where I ran against some of the top athletes on a regular basis, has really helped me a lot and that really helped to strengthen my nerves coming to the Jamaica Trials; and I was determined to do well."

"With the likes of Orlando (Bennett ) and De'Jour (Russell ) in the race, I knew it was going to be tough and one of the three was going to be left out. I was determined to finish at the front," Thomas continued.

With the IAAF World Under 20 Championships two weeks away, he is hoping to do something special at the event.

"2016 was a disappointment for me, also my indoor season in college in my first year; but come Word Juniors, I am hoping to do something very special," said Thomas.