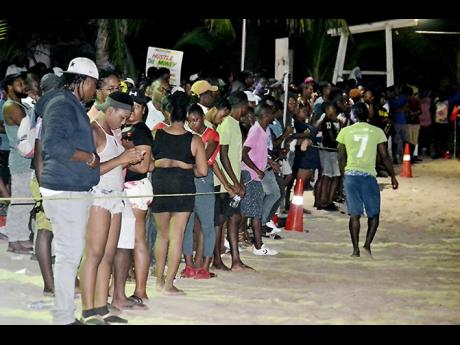 The semi-finalists in the Campari Magnum sponsored Sharkies Night Futsal beach competition have been decided, following Sunday's round of matches.

The semi-final matches will see Out Dere Family up against Third Eye Strikers at 7:00pm and Carl Rattray taking on Salem Lions at 8:00.

The finals will be contested next Tuesday, July 10, starting at 8:00 following the play-off for third.

"The competition has been spectacular so far," said organiser Leighton Brown. "This is the second year of the competition and the crowds have grown phenomenally , it's only at Drax Hall you would see such crowds. The fans are really enthused. It's like a party on the beach."

Brown paid tribute to the proprietor of Sharkies Seafood Restaurant, his brother Alwyn Brown, whose initial investment started the league.

"To be honest, is one of the biggest competition right now inna St Ann," said a fan from Salem, known locally as Hot Spice. "Brown Speed (Alwyn Brown) a good youth who support people so di whole a we haffi support it. Brown Speed to the world cause a good youth an' mi like it, it strengthen the youth dem."

The futsal competition started June 12 with 16 teams divided into four groups. The teams are battling for $200,000 in prizes.