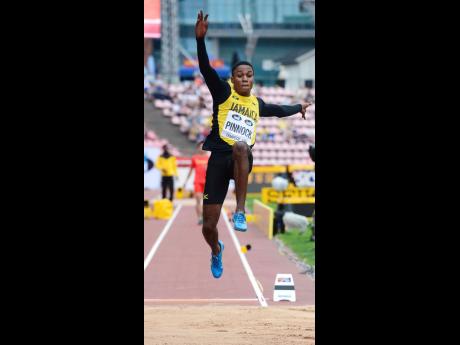 Wayne Pinnock captured Jamaica's first medal at the IAAF World Under-20 Championships, with a bronze medal in the Men's long jump in Tampere, Finland yesterday.

Pinnock, an 18-year-old Kingston College (KC) student, produced his medal earning performance with his opening jump measuring a distance of 7.90m. He gave the country its first medal in the event at the Championships. His schoolmate Shakwon Coke, who was injured earlier this season, produced a personal best for a seventh-place finish in the same event.

"It's a great feeling to know that I trained so hard and I am being rewarded with a medal," said Pinnock. "I was looking forward to a new personal best. It didn't come, but I won a medal, so that is great," said Pinnock, who added that his long jump success will not stop him from continuing in sprint hurdling.

Jeremy Delisser, who coaches both Pinnock and Coke at KC, is in Finland as part of the Jamaican team's coaching staff and he was happy for his charges.

"I feel proud of both athletes, their families, and, of course, the entire country. I was hoping for personal bests for both, but (only) Shakwon was able to do that, and I can't ask for more," he said.

"For Wayne, it was very close, but most importantly he got us off the mark to get the ball rolling. I am happy, and this is a good platform for the rest of the team going forward."