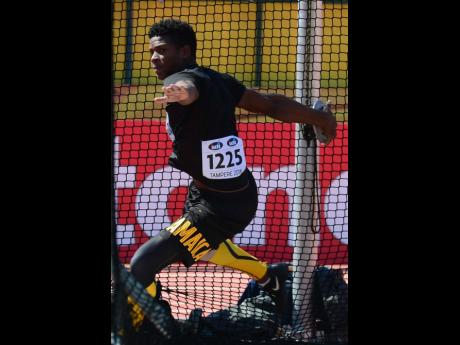 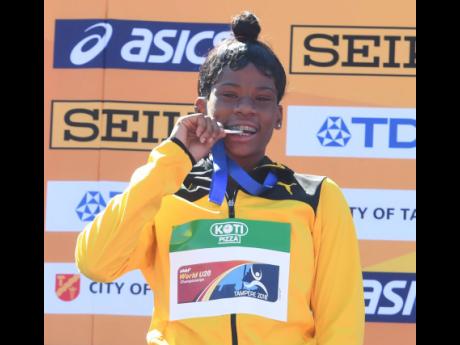 Britany Anderson bites into her silver medal after her second place finish in the 100m hurdles at the IAAF World Under 20 Championships in Tampere, Finland. Photos/Collin Reid courtesy Alliance Mastercard, Courts, Supreme Ventures, GraceKennedy and JN
1
2

Ewan Scott, manager of Jamaica's team at the just-concluded IAAF World Under-20 Championships in Tampere, Finland, was full of praise for the island's athletes, after their historic performance at the event.

The country registered its best performance ever at these championships, ending with 12 medals - four gold, five silver and three bronze.

Three medals were added on yesterday's final day. Britany Anderson was controversially given the silver medal in the 100m hurdles despite clocking an identical 13.01 with USA's Tia Jones, while Kai Chang, with a personal best 62.36m, won the men's discus and the women's 4x400m relay team won a bronze medal.

It bettered the performance of the 2002 championships, which was held in Kingston. Back then, the Jamaicans won 11 medals.

The Jamaicans also had their highest finish on the medal table in Finland, ending in second place behind Kenya. Their 101 points also placed them third on points.

"It's a very good feeling. The athletes gave of their best and were duly rewarded with medals and personal bests in their events," said Scott, when asked about his opinion on the team's performance.

Scott also pointed to the dedication of the entire team including officials.

"It took a lot of dedication and hard work by the athletes, who were ably guided by the coaching staff as well as the management and medical team, which worked tirelessly around the clock. It's a true testimony to the overall success of the team," said Scott.

Despite the team' s outstanding performances, things could have been much better, considering that several of the country's top young athletes were not present at the National Junior Championships and Scott believes that both schools and administrators have a role to play in avoiding such a situation in the future.

"In the future, better liaison and cooperation with the various schools and institutions need to be done to ensure that these athletes are kept in training and be at their optimum," added Scott.