Williams, Thomas were the top stars in Tampere 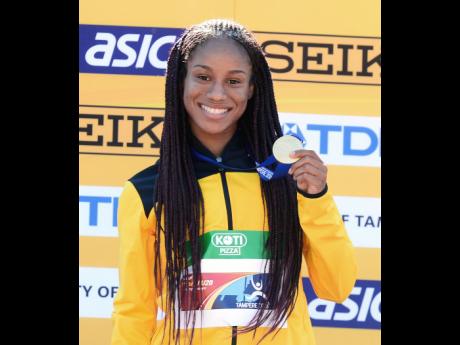 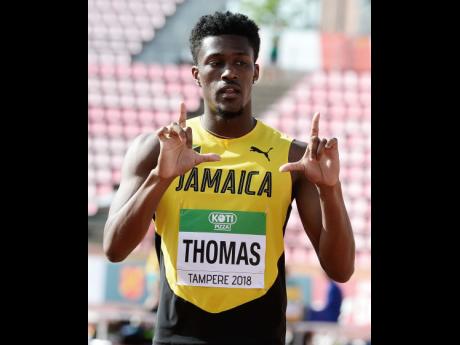 Optimism is high in track and field circles following the country's success at the recently concluded IAAF World Under-20 Championships in Tampere, Finland.

Jamaica produced its best-ever performance at these championships at its 16th staging. The country broke into the top three in the medal placings for the first time after garnering four gold, five silver, and three bronze medals. The tally beat the previous best of 11 when the championships was held at home in 2002.

Only table-topping Kenya, with six, got more gold medals than Jamaica while only, third place team, the United States (18), got more medals.

After a close finish in the 100 metres, where she clocked 11.16 seconds to deny American world leader Twanisha Perry (11.19) the gold, it was Williams' performance in the 200 metres that had her fans in a frenzy.

She went into the championships with a personal best of 23.11 seconds behind Americans Lauren Rain Williams (22.51) and Jayla Kirkland (22.93) and Australia's Riley Day 22.93. However, spurred on by her 100m success, Williams was brilliant in the final, clocking a championships record 22.50 for gold. Veronica Campbell-Brown achieved the double at the 2000 championships in Chile.

The next best performance by a Jamaican came from Damion Thomas, another overseas-based athlete. He gave the country its first success in the men's 110m hurdles after a disappointing meet in Poland two years ago. Then he crashed into the first hurdle in his semi-final. This time, he made no mistake as he had earlier shown that he was ready for the gold this time around after equalling world Under-20 record of 12.99 at the National Championships. It was, therefore, no surprise when he won the event in 13.16.

Six years ago, the country got its first gold medal in a throwing event at the championships courtesy of Fedrick Dacres of Calabar High School in the discus. Another Calabar student mined gold at this year's meet. Kai Chang, who has shown tremendous improvement in the event this season at Calabar, after transferring from Titchfield, was not a medal contender going into the championships, but on the big stage, he produced a lifetime best 62.36m on his second attempt to give the country its second-ever win in the event at the championships.

Shian Salmon, the unlucky Britany Anderson, Orlando Bennett, Christopher Taylor, Chantz Sawyers, and Wayne Pinnock all picked up individual medals, while the women's 4x400m and the men's 4x100m relay with a National Junior record were the medallists for the country.

While the performance was special, Jamaica could have picked up more medals if preparations for the meet had been better.

The team was not the strongest going into the championships as many top athletes were left at home because of injuries or lack of preparation. Several athletes had called a halt to their season at the end of the Boys and Girls' Championships and the National Championships.

The governing body, the Jamaica Administrative Athletics Association, should have assisted as many of the schools could not continue to fund the preparation of the athletes for the national team.

Some years ago, the top athletes from "Champs" were identified and weekend camps were held ahead of the National Championships, and the likes of Usain Bolt, Jermaine Gonzales, Melaine Walker, Kerron Stewart, Sherone Simpson, and Simone Facey were part of this programme, and we have seen what these athletes did in the past.

One wonders what the medal haul would have been if athletes such as Hydel High's Cherokee Young, Holmwood Technical's Sasheika Steele and Michae Harriot, Edwin Allen High's Kevona Davis, Rhodes Hall High's Rovane Williams and Petersfield High's Antonio Watson were at the meet. Jamaica could have easily captured several more gold medal and topped the standings at this level.

Next stop for the country's athletes will be the World Youth Olympic Games to be held in Buenos Aires, Argentina, October 1-6. It will be interesting to see what preparations will be made ahead of this meet. The athletes are now on a break, but a few of those athletes who were in Finland - hurdler Anderson, Ackera Nugent and Colisha Taylor - are eligible.