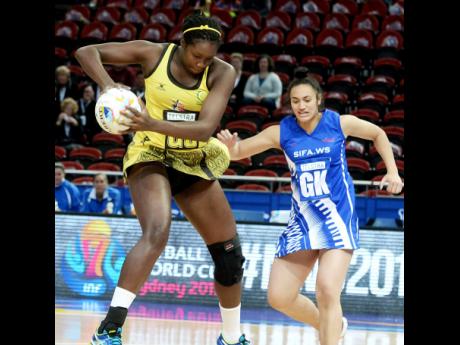 Despite a first-half injury, Sunshine Girls captain Jhaniele Fowler-Reid led the way with perfect shooting, scoring 48 goals from 48 attempts to guide West Coast Fever to a 63-57 semi-final win over the Giants and a spot in the Super Netball grand finals in two weeks.

Fowler-Reid, playing her first season in Australia, after competing for several years in New Zealand, was extremely excited after helping her team to its first appearance to the grand final.

Playing away in Perth to the Giants team, which had topped the preliminary stage of the competition with 76 points and beating the second-place finishers, the Fever, in the final game of the prelims, Fowler-Reid and MVP Nat Medhurst (9 goals, 9 attempts), combined well to give their team a convincing win.

There was a slight scare, however, for the Jamaican in the first quarter.

With 3:47 minutes remaining in the quarter, Fowler-Reid had to be taken off the court after suffering a knee injury, with her team leading 15-7 at the time.

She returned late in the second quarter and managed to stay on court for the remainder of the contest.

"I am very excited that I was able to finish (and contribute to) the victory. My knee will be okay as it was only a bit sore, and I will do an MRI just to make sure all is well", said Fowler-Reid in an interview with The Gleaner yesterday.

Fowler-Reid's team will host the grand final against either the Giants or the defending champions, Sunshine Coast Lightening, which defeated Queensland Firebirds and another Jamaican, Romelda Aiken, 57-56 in the other semi.

Fowler-Reid said that she was looking forward to the final.

"We are looking forward to the final, and we are happy to know that it will be a home game as it is good to have the crowd behind us, and I know we will do well," said Fowler-Reid.