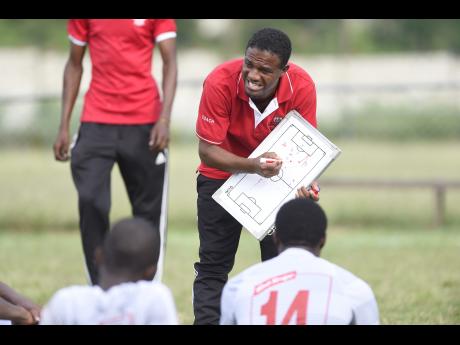 Former UWI FC coach Marcel Gayle goes over tactics with his players at half time during a Red Stripe Premier League match against Montego Bay United held at the UWI Bowl earlier this year.

Recently appointed head coach Marcel 'Fuzzy' Gayle knows expectations are high for his new team Waterhouse Football Club, but says they are no higher than the expectations he has for himself.

Gayle, who is just a few weeks into his new head-coaching assignment at the Drewsland-based Red Stripe Premier League outfit, says he will give his best.

Speaking last week in the full knowledge of the club's runner-up finish last season, Gayle said: "So work is there and I just have to go there and take the bull by the horns, and, hopefully, we can see how we go from there."

Gayle, who once before was part of the Waterhouse coaching set-up, built his reputation by aiding the University of West Indies in their rise to the Premier League, first as assistant coach to Neville Bell and later as head coach. He is also a fundamental part of the coaching set-up at schoolboy football giants St George's College.

"You know, I have been around the football environment from the inception of life, so I think I have learnt from the greatest persons in football," he reflected. "I'm a hard task master."

"I demand a lot from my players, but I also remember the human side and I think management is the most (important) thing," Gayle said of his approach to coaching.

"When you can manage these players, half your job is already done," he added.