Girlz were well prepared for penalties 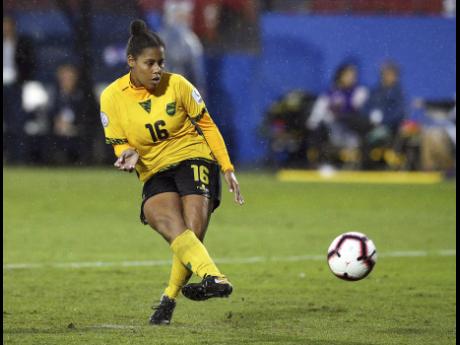 Dominique Bond-Flasza's winning penalty kick at the Concacaf Women's Championships third-place play-off match against Panama will forever be etched in the minds of local sports enthusiasts.

Bond-Flasza's calm side-footer in the right hand corner created history as it secured Jamaica's spot in a FIFA Women's World Cup for the first time.

But in order for that moment to happen, Bond-Flasza said the team had to put in some serious preparation.

"Penalties are the last thing we wanted, so I was a little nervous going into it. I had my confidence in the rest of my teammates that they would make theirs," Bond-Flasza told the BBC Caribbean. "When Nicole (McLure, goalkeeper,) saved two of the penalties that took some of the pressure off me."

And the careful preparation for penalties was made clear when the coaching staff substituted number one goalkeeper Sydney Schneider for McLure in the last minute of extra-time.

"It is something that we were preparing for knowing that this could have happened and we were successful because we had prepared for the moment," Bond-Flasza said.

Jamaica won the contest 4-2 on penalties after both teams could not be separated at the end of regular and extra-time.