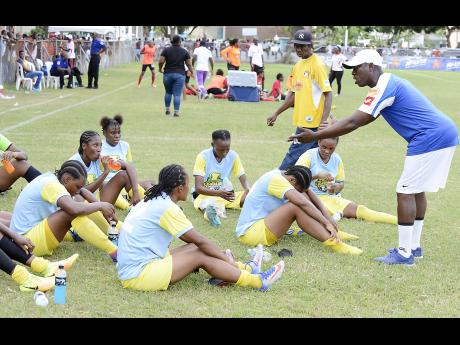 Olympic Gardens created a major upset in the JFF Women's Premier League after scoring a 2-1 win over favourites and the previously unbeaten Waterhouse in their first-leg semi-final match at Drewsland on Saturday.

The result means Waterhouse will have to win by at least two goals this weekend to make it to final.

Tatyana Polack fired Olympic in front in the 55th minute into the contest, before an own goal three minutes from time gave them a 2-0 advantage. But an added time strike from Jessica Johnson halved the deficit going into the second leg.

Waterhouse was without their Coach, Xavier Gilbert but the former national women's coach said his absence shouldn't have affected the way his side played.

"It may have made a difference but me being there or not should not make a difference. We should have been able to win the game with the quality that we have," he said.

"It was a disappointing result for most of the girls. They believed they should have done better, so they were really disappointed because we wanted to go through the season unbeaten. If we had remained unbeaten through the season then that means we win the title. So this is a semi-final we didn't expect to lose but the good thing is that we have a second leg, so now that we have lost we will have to regroup and pick ourselves up and come again," he said.

Olympic Gardens coach, Alicia James, said after the knockout semi-final defeat to the said opponent, they went home and did their homework and it paid off.

"We just worked on some things we needed to work on and it paid off. We play them twice this season. We played them in the knockout semi-final and we should have won that game. But we saw where we went wrong and went back to training and work on a few things and it worked out on the day.. Come the second leg we will have to work on some more stuff," she said.

She has also played down to emerging rivalry between the teams, even though the neighbouring communities have a long standing rivalry.

"We don't have any rivalry with Olympic, because over the years Waterhouse has always have better players. So I don't know about any rivalry. But we expect them to play hard because they are behind in the game, so we are looking for them to come hard for this game," she added.