Grooms to be honoured at Super Stakes 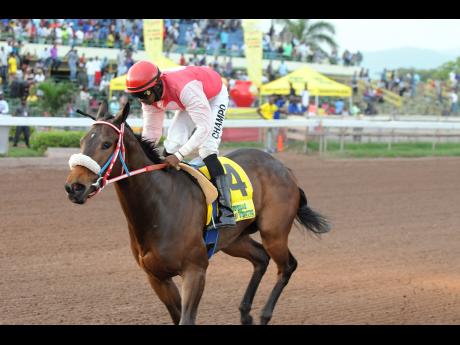 Sponsor Burger King has maintain its tradition of honouring the players and unsung heroes in the horse racing industry and at this year staging of the Burger King Super Stakes, the ten grooms who have conditioned the previous ten horses of the year will be honoured for their contribution to the sport.

The announcement was made on Monday at the launch of the 40th Burger King Super Stakes race, set for November 9 at Caymanas Park.

Horse of the year SHE'S A MANEATER, will start as favourite for the Super Stakes, however, trainer Wayne Dacosta expects stiff competition from WILL IN CHARGE and BIGDADDYKOOL. Other top contenders include PERFECT NEIGHBOUR and HOUDINI'S MAGIC.

Ten races will be run on the day and Sabrena McDonald Radcliff, head of sales and marketing at Burger King, noted that they are in their fourth year of sponsorship and declared the theme of this year race day as KINGS WINNINGS, and promise there will be lots of prizes and give aways on the day.

SVREL Director of marketing, Peter Green, also pointed to the promoters 15 new off track betting (OTB) outlets across the island and said they will continue to open new parlours in an effort to increase access to poorly accessible areas.

The said they will continue to add to what they already have as by the end of the year they intend to have at least 50 new OTBs in operation.

"This will add opportunity and value to our sponsors and live races will be televised live to these OTB locations. This will be an opportunity to promote their brands and their products," said Green.