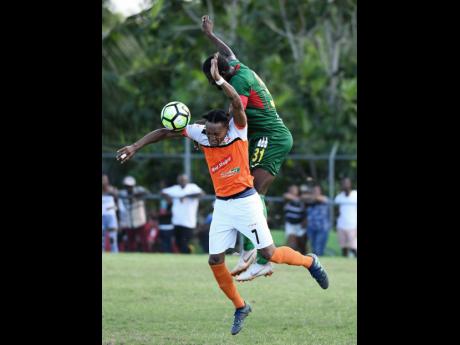 Orrette Richards of Dunbeholden gets hit in the back by Humble Lion captain Hugh Howell while duelling for an aerial ball during their Red Stripe Premier League encounter at the Effortville Community Centre on Sunday, October 21, 2018.

There are not many players, or characters like Hugh Howell, in the Red Stripe Premier League (RSPL). Howell is a defensive midfielder who does most of the dirty work for his team. He has a combative spirit and a never say die attitude, one who motivates and inspire teammates and is always willing to throw his body on the line and sacrifice everything to help his team win.

A former Waterhouse player who now represents Humble Lion of Clarendon, Howell, showed his mettle and turned in a great performance last Sunday in a 1-0 win against Mount Pleasant FA, as for their first win of the season.

Although the Clarendon club has many star players, everyone knows Howell's importance to the character of the team and last Sunday he demonstrated why he is such an important element, as he was all over the pitch helping out his midfield and defence, recovering possession and covering players out of position.

But this midfield enforcer is not only effective at the defensive end of the field, he also possesses good technical qualities and the Humble Lion winner against Mount Pleasant demonstrated his effectiveness on both sides of the ball, as after stealing possession, the player burst through midfield before slipping a precise ball to Levaughn Williams, who slotted home the winning goal.

For Humble Lion the intention now is to go on a winning run. "Wi ah go build on this and go forward. Is five straight wi wah tek and one gone, so we have four more," he added.

The 32 years old Howell left Waterhouse five seasons ago because he wanted a new challenge and so far his time at the Central Jamaica club has been fruitful, even though they have come up short on a few occasion.

"Mi make the move about five years now when a good friend of mine introduce mi to Humble Lion and bring mi to Mike Henry and is there suh it start. But a nuh nothing different from Waterhouse, wi just put out the same energy so wi heart deh yah, wi come yah and do the same things," he said.