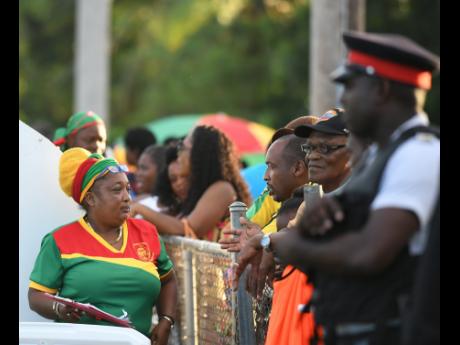 The ever-present Miss Ingrid Smith (left) of Humble Lion FC engages in conversation with the supporters.

Since Humble Lion entered the Premier League almost 10 seasons ago in 2009, team manager Ingrid Smith has been an ever present fixture on the sidelines for the Clarendon club.

Always attired in her Rastafarian coloured (red, gold and green) head wrap, Smith, who also has dreadlocks declared that she does not a practice the faith.

The veteran football administrator, who usually sits next to her team bench during matches, normally goes about her business discreetly and militantly but without much attention. But her importance to the Effortville-based club cannot be understated.

Smith, whose main responsibility is ensuring things are in place for training and match days, expressed the undying love for the club and insists that only Brazil could make her leave Humble Lion.

"On match days I make sure everything is ready. I do stats, match cards, refreshments and make sure equipment is ready. So if a line is lean, the match officials will come to me to get it right," she explained.

Smith, who has been with the club since 2003, was the secretary. However, she does not have that much responsibility again. But the senior administrator, whose love for the game was generated by South American football kingpins, Brazil, said she would never leave her club to join another local club.

"(Last) Sunday I was in St Ann and a gentlemen asked if I want a job there. I turned to him and said the only place I am leaving Humble Lion to go is Brazil. Brazil alone could take me away (from Humble Lion), not even Jamaica (national team). I got into football because of Brazil. Mi love Brazil from as long as I know. Brazil I owe everything in football to. Is just Brazil get mi to love football," she declared.

Smith's mother is from Effortville, but she grew up in Four Paths. However, she later moved to Effortville to live with her and she got involved with the club after she started visiting the community centre where the team trained, daily. She was then invited by a former player (Odean White, now deceased) to their meetings.

She recalled they were playing Major and Confederation leagues and held meeting on the steps of the centre. However, when the club's former financier passed away in 2008, Smith remembered when member of parliament, Mike Henry, came in, and she described his involvement as a blessing.

"It was a lot of stress, those times. We didn't have a manager, everything was volunteer. Players never got paid, everybody played for free and everybody ah work free and it was good. He (Henry) came about 2009 when we were qualifying for the Premier League and that gave us a push because the other guy (financier) got killed the same year. So he came in at the right time," she stated.

"We were playing Super League and most times we reached the semi-final or final. The Premier League wasn't much of a change because we did the same things we use to do. The only thing was that we could buy almost anything because money was there and players could get paid," she added.

She says like many depressed communities, football plays an integral role in their lives, and she hopes the players can deliver the Red Stripe Premier League (RSPL) title for their committed fans.

"Football hold this community together. If we don't have football, we don't have anything else, especially with the violence. When football is being played, we usually have far less violence," she said.

She continued that. "Every team's dream is to win the Premier League. We have come close a couple times, but any time we are to win it, nothing will stop us, it's just not our time yet. But we need to win the Premier League and we can do it. (Last) Sunday was the start of the first win (against Mount Pleasant FA) and we will continue. My biggest disappointment is our top forwards ah miss too much goals. If you're a top forward, you should score more than you miss, and that mek mi upset," she concluded.