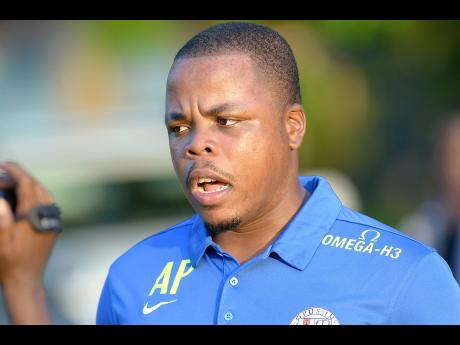 When UWI coach Andrew Peart brought on Michael Heaven against Dunbeholden after they were reduced to 10 men with little over 20 minutes left in their Red Stripe Premier League (RSPL) game at UWI Bowl yesterday, he did so to secure the point they had in the bag with the scored tied at 0-0.

However, the former Cornwall College defender did more than that, as he netted the only goal a minute from time to give UWI a hard-fought 1-0 win over their opponents.

The home team went down a man 67 minutes into the contest when Kemar Flemming was ejected for a dangerous tackle. Dunbeholden then looked to capitalise on the advantage and poured men forward in search of the winner. However, UWI broke on the counter and Heaven found himself totally unmarked at the far-post to stab home a volley past Eric Edwards in the last minute.

The former Montego Bay United player said although he was sent out to prevent goals, he was prepared to do anything to help his team.

"My coach believes in me and I have been putting in the work and he called on me and I showed up. But I went out with the mindset to do anything for my team and it resulted in a goal. I saw that we were few in numbers going forward, so I decided to make that one run and it brought something to the table and I took it and I am grateful," he said.

The player, who has not started regularly so far this season, hopes this goal will bring more playing time.

"I look ahead with confidence and I just plan to put in the hard work and get something in the end. We are up in the table so the work just need to be continued," he said.

The first hour of the game was equally contested, as both teams showed good attacking enterprise and created good scoring chances on which they failed to capitalise. However, when the visitors thought they had the advantage with the extra man, the host struck late to grab all three points.

"That (losing a player) was tough and the opponent seized the opportunity and brought on more attacking players. But the team figured we still had it in us to win. So credit to Michael Heaven, who came off the bench to stop the flow of attack down the left. But saw the right moment when he could go forward from right back and score," he said.

The win lifted UWI to second in the table behind Portmore and level on 17 points with Mount Pleasant, who were down to play Arnett Gardens in a late game last night.

However, Peart was not carried away with their climb up the table.

"Now it's about accumulating as much points as possible, our position in the table is not that important now, getting the points was the most important thing," he added.