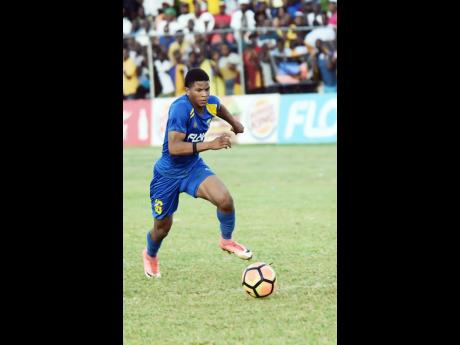 Lenworth 'Lenny' Hyde, coach of Clarendon College, said they will be motivated to go all the way when they take on Dinthill Technical High School in the semi-finals of the ISSA/WATA daCosta Cup at the Montego Bay Sports Complex this afternoon.

"The players know that we have to do it for Chung Fah also. He started it at Clarendon College, him and myself, so to see that I am the coach, it would only be fitting if the players can just do it for him. So yeah, that is the aim to win the daCosta Cup for him," said Hyde.

The Chapelton-based institution is looking to turn the tides after a disappointing run in the ISSA Champions Cup, where they were kicked out at the round of 16. Hyde's team was without Nicque Daley and Ricardo McIntosh, who were away on national duties and the veteran coach is happy to have them back in the squad against a good Dinthill unit.

"It's good to have them back in the team. Training has been going great. We just looking forward to a good game from everybody as we have to go out and give our best. We went to the finals last year and would want to make it one better this year in winning the title and would have to get past the semi-final to do so," said Hyde.

"It's a tough team Dinthill, we know we have to go out there and put our best foot forward. We know we will have to play a disciplined game against this Dinthill team and try to get a good result," he added.

The encounter will be a repeat of last year's semi-final that CC won 5-2.

Xavier Gilbert, coach of Dinthill, is aware that CC will have added motivation going into the game. But he believes that despite not having the best history against the 2014 champions, they are prepared to turn the tables this evening.

"Definitely, we would want to get the better of them. The reality is that apart from psychologically, I don't think the results of last year or years before have any bearings on the team," said Gilbert.

"We have them preparing and doing well, so once we can come out and execute, we should be ok. Yes, it's a tough opponent, who will be even more motivated with the passing of their former stalwart coach, Winston Chung Fah. However, we are mindful of the added motivation, so we will do what we have to do and, hopefully, get the job done," he added.

In the second semi-final, Cornwall College will take on Frome Technical High School in a western clash at 6 p.m.