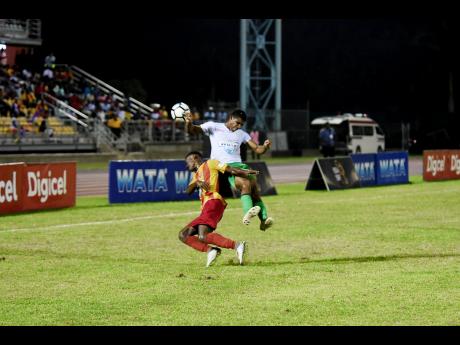 Solano Birch (left) of Cornwall College and Anthony Scott of Frome Technical High School get into a tussle for the ball in the semi-final of the ISSA/WATA daCosta Cup at the Montego Bay Sports Complex, yesterday. 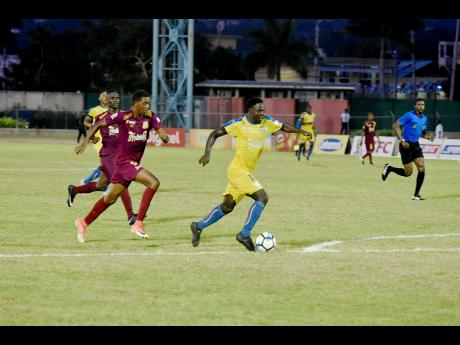 Javel Ellis (right) of Clarendon College (CC) dribbles away from Dinthill Technical's Karim Bryan after beating two other defenders in their semi-final of the ISSA/WATA daCosta Cup at the Montego Bay Sports Complex, yesterday. CC won 4-0.
1
2

Dean Weatherly, head coach of Cornwall College, had showers of praise for his goalkeeper, Peter Sinclair, whose outstanding performance propelled them into the ISSA/WATA daCosta Cup final, where they will meet Clarendon College. Cornwall College advanced 4-2 penalties over Frome Technical after a 0-0 scoreline at the Montego Bay Sports Complex, yesterday.

"Yes, he does his job very well. He is one that works very hard at his game. We know hard work pays off and we see where we are reaping the rewards for that now," Weatherly told STAR Sports.

Weatherly is proud to be in another final, despite a relatively poor performance on the night.

"It was a lacklustre game for us," he said. "I think we were flat, but, at the end of the day, the defensive aspect of the game stood up for us. We have been depending on that all season, so we have to give God thanks. Now we just have to get back to the drawing board, look back at the tape to see where we went wrong, and decide from there."

"We have a final (Champions Cup against Jamaica College) on Saturday to prepare for, and then we have all of next week to prepare for the daCosta Cup final. It is worthy for us to be there, considering the hard work that we did," he added.

Lenworth 'Teacha' Hyde, head coach of Clarendon College, said a team talk at half-time was enough to get his boys settled after surviving a dominant Dinthill first half.

"That's how he plays, he doesn't know any other way. He is just a forceful player, and with the defender behind him, the sky is the limit for Nicque Daley," Hyde said.

"Good second half. The Dinthill team high pressed us in the first half with a lot of intensity. We didn't handle it well, as we kept losing composure and not playing out from the back as we should. However, I spoke to them at half-time, told them to enjoy the moment and I think they did that. Nicque Daley set the tone with an early goal in the second half, from there they were more relaxed and confident. Once we are confident like that, we play good football," he said.