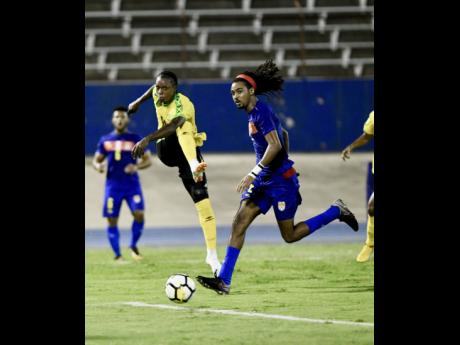 Jamaica's goalscorer Darren Mattocks (left) rifles a shot towards the Cayman Islands goal while being pursued by Cayman Islands defender Joshewa Frederick, in their concacaf Nations League encounter at the National Stadium on Sunday, September 9, 2018.

National Striker Darren Mattocks is tight-lipped as to where he will be plying his trade next season, after his contract expires on December 31 with Major League Soccer (MLS) side DC United.

Mattocks, who signed a one-year contract with the Washington-based club last year, netted 10 goals in 25 appearances for the team.

Mattocks told STAR Sports that he is still weighing up all his options before he decides on his next move.

"But there are always offers on the table,especially in the MLS from good teams, but I don't want to discuss that right now," said Mattocks, while adding that he would love for the opportunity to play in Europe one day.

"Anyone would love a chance to play in Europe, but at the same time the MLS is a league with top-class players. But at the end of the day, it comes down to a lot of different aspects, so I am going to do what is best for me and my family," he said.

Mattocks pointed out that this season was a somewhat an up and down one for him.

"Personally, for me, it was really good because it is most goals I have ever scored in a single season," said Mattocks, who was competing in his seventh season in MLS.