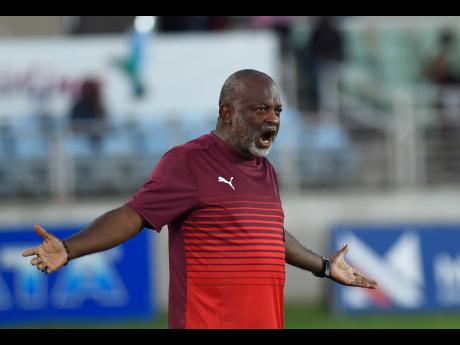 Dr Dean Weatherly, head coach of Cornwall College (CC), is looking to continue making the most of hometown support with both the daCosta Cup and Olivier Shield trophy games set to be played in their backyard, at the Montego Bay Sports Complex.

CC won their first trophy of the 2018 schoolboy football season on Saturday, when they defeated Jamaica College 1-0 in the final of the ISSA Champions Cup at the same venue, to take the title to rural Jamaica for the first time since its inception in 2014.

The Montego Bay-based team will again be looking to feed off the home crowd support this Saturday when they battle Clarendon College in a clash of the CCs for the daCosta Cup crown, a title, which would open the path for a shot at the Olivier Shield.

"Sometimes (playing at home) it can work both for and against, but last night (Saturday) was one that worked for us in that it made the boys a bit more comfortable. The crowd definitely played the '12th man' for us, which was really a welcoming sight with the support that we got," said Weatherly.

After creating history in the Champions Cup, Weatherly is looking forward to winning the daCosta Cup and getting a chance to again lift the Olivier Shield, which is contested by the winners of the Manning Cup and daCosta Cup competitions.

With the Olivier Shield matchup also set for the second city, Weatherly is hoping the support will propel his team to break the urban teams' stranglehold on the title. A rural school has not outrightly won the prestigious title since 2004, when Glenmuir were successful. Glenmuir also shared the title two years later with Bridgeport, but since then, only Manning Cup champions have lifted the Olivier Shield.

Cornwall College last won the Olivier Shield in 2001, when they won the treble also under the tutelage of Weatherly.

"We want that to happen," said Weatherly. "Our goal at the beginning of the season was to be playing in that Olivier Shield game, which would be our ultimate achievement. That was the mandate set by me to the players..." said Weatherly.

"We definitely want to bring back the glory of schoolboy football to rural Jamaica, although I don't consider us being rural because we are from the city of Montego Bay. We can start rebuilding our own dynasty here."