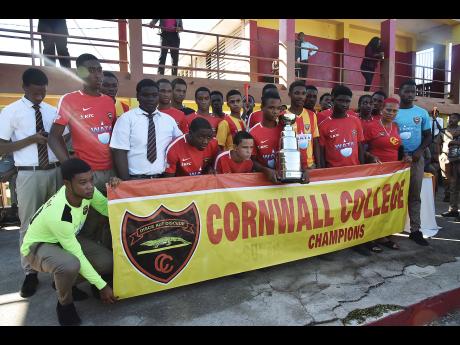 Members of the Cornwall College daCosta Cup team show off the trophy during a celebration held yesterday on the school's grounds.

The excitement was buzzing at Cornwall College yesterday morning at general assembly as the football team, school population, old boys, and girls from their sister school Mount Alvernia High School celebrated the institution's first title of the season.

On Saturday, the team, popularly called 'CC', became the first rural school to win the ISSA Champions Cup, getting the better of Jamaica College 1-0 in the final at the Montego Bay Sports Complex.

Cornwall can win three titles this season. They will have to win the ISSA/Wata daCosta Cup final against Clarendon College this Saturday, at the same venue, to advance to the Olivier Shield, where they would face the ISSA/Digicel Manning Cup winner.

Cornwall last won a treble in 2001 under the tutelage of current coach Dr Dean Weatherly.

"It's a great feeling. What, effectively, we have done is to remove that proverbial monkey off our backs. Since its inception, only schools in the Corporate Area have won that cup ... . To be the first rural winner means a lot to us. In fact, Cornwall College is first in many things, and this is just one of them," said Michael Ellis, principal.

"I must confess, this is my first piece of silverware. I've been a principal for 15 years and have tried very hard with another school but have never been to this point. So it's a great feeling for me personally," he added.

Team captain Shavon McDonald, who was competition MVP and Player of the Match after scoring the lone goal in the final, said this win is a sensational feeling, having lost the 2016 final to Wolmer's Boys.

"It's a great feeling for myself and the team, knowing that I got a chance in the final in 2016 and missed but I took it this time around. We just want to continue on the same path because Saturday is another day to create history," said McDonald.

Me'Shale Sherwood, student council president of Mount Alvernia, said that they and CC are one and that Alvernia's support goes beyond measure.

"To us, we don't just take Cornwall College as our brothers, but our own school, so when they win, we feel as if we win as well. Every match, we are there supporting, and no matter what, win, lose or draw, we will be behind them a hundred per cent," said Sherwood.

She assured that the girls would turn out in greater numbers for the daCosta Cup final on Saturday.