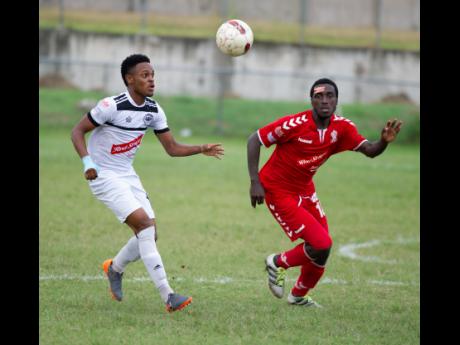 Cavalier striker Alex Marshall keeps his eyes on the ball while UWI's Michael Heaven does his best to stay close to the attacker, in their Red Stripe Premier League encounter at the UWI Mona Bowl, yesterday.

Cavalier SC defeated UWI FC 1-0, courtesy of a Alex Marshall 25th minute strike in their Red Stripe Premier League (RSPL) match at UWI Bowl, for their third consecutive away win of the season.

The victory also lifted the Rudolph Speid-coached team from fifth to second in the standing with 23 points, seven behind leaders Portmore. However, Waterhouse (21) who were down to play a late game, and both Arnett (22) and Mount Pleasant (21), who will meet this evening in the Monday night game, have a chance of overtaking them again.

But Speid who has seen his team take maximum points from Tivoli, high-riding Mount Pleasant and now UWI on the road, attributes his team's success on the road to opponents playing for a draw when they come to Stadium East, the Cavalier home ground, and playing to win at their home fields.

"We got wins at Tivoli and Mount Plesant, so this is the third win in a row that we got maximum points on the road. This was a particularly very hard set of games, Tivoli, Arnett, Mount Pleasant and UWI, so we are very grateful we were able to come out of those four games with ten points out of a possible 12.

"When most teams come to our home they sit behind the ball and don't try to penetrate and play for a draw, but when they are at their home they think they can win, so they play more open, so it is much easier for us," he explained.

"But it's a tremendous performance from our players. Since we got our players back from the (national) Under-20 tournament, we are back to full strength and it has helped us a lot."

With their good start in the second round, taking seven out of 10 points, Speid says the aim is to get maximum points in this round in order for things to be a bit easier in the savage third round.

"We were not pleased with our sixth place position in the first round. This round we have seven points so far but this is the round you really have to make your mark. You cannot wait until the third round, because the third round is going to be the hardest round, where everybody is in a dog fight for the points, so the aim is to do better in the second round than we did in the first round," he stated.

Cavalier controlled possession for most of the game but Patrick Brown wasted a great chance to put the host ahead early in the contest when he inexplicably kicked over the bar from three yards.

Minutes later, Marshall picked up a ball outside the area and beat Amal Knight with a low strike inside the post.

The defeat was UWI's fourth in a row and things continue to get tougher for coach Andrew Peart.

"Definitely a tough result. We had opportunities and just could not find the net. That's the worry thing for us, not scoring, and we are conceding because of simple errors and that's worrying for us. But we just have to have to work hard," he said