Nicque eyeing a return to CC 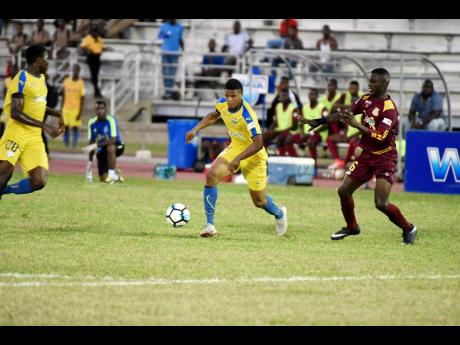 Clarendon College ace striker Nicque Daley says it is possible he could be back for another season of daCosta Cup football with the 2018 rural schoolboy football champions.

Many football observers believe the talented young striker, at age 18, should follow in the footsteps of a player like Kaheem Parris, who forfeited his final year of schoolboy football to pursue a professional football career.

Daley finished the season with 21 goals - 12 of which came after the first round.

But the national Under-20 striker hinted on television after his school's daCosta Cup final victory over Cornwall College last Saturday that he could be back at school next year for another season of daCosta Cup.

However, his immediate focus is on helping Clarendon College lift the Olivier Shield title and doing well for Cavalier in the Red Stripe Premier League.

When quizzed on whether he would return to school to help Clarendon retain the trophy, Daley stated: "It is a possibility, it's a possibility," he said. "The Olivier Shield is the focus right now and we want to take home that trophy as well."

As the schoolboy football season ends this Saturday with the playing of the Olivier Shield final at the National Stadium, Daley will be joining Cavalier in the Premier League.

After beating Cornwall College 2-1 to be crowned rural area kingpins, Daley said it was down to strong will and determination.

"Last year, we lost, but that was the past. This year, it's a new season, and I just remained focused and kept concentrating on the prize throughout.

"Our aim was always to win the game, and we always have the mindset that nothing is given, everything has to be earned, so we went down to 10 men, but we never gave up until the last whistle," he said.

"My coach always tells me to go out and give my all and I went out there and gave my all, and ended up scoring a goal in the match. I am thankful I could have played such an important role for my school."