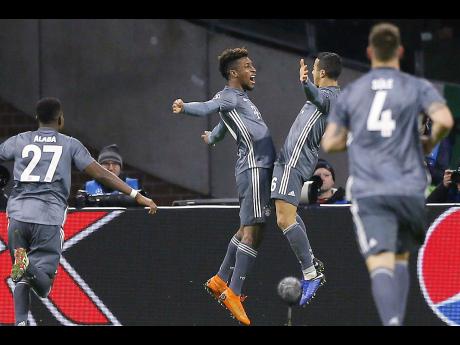 In a game that featured four goals after the 82nd minute, two red cards and two penalties, substitute Kingsley Coman looked to have grabbed a winner for Bayern in the 90th before defender Tagliafico tapped in the equaliser five minutes into stoppage time. Robert Lewandowski scored twice for Bayern, including an equaliser for 2-2 in the 87th.

"It was a great match, I want to congratulate both teams for reaching the next round," Bayern coach Niko Kovac said.

The two teams were already assured of progressing to the round of 16 before the match at Johan Cruyff Arena and Bayern needed only a draw to ensure top spot in the group, while Ajax needed to win. With group victory at stake, the two teams put on a memorable show.

"This is why fans come to the stadium, why football is such a great sport on television," Ajax coach Erik ten Hag said. "My team and Bayern provided a true spectacle."

Topping the group means Bayern will avoid other group winners, including Barcelona, Manchester City and Real Madrid in the next round. But Kovac said plenty of good teams finished second, including the likes of Liverpool and Tottenham.

Lewandowski put five-time European champion Bayern ahead in the 13th minute and levelled with an 87th-minute penalty after Tadic had scored twice to put Ajax in front. Coman calmly fired the ball past Andre Onana in the 90th, before Tagliafico's equaliser.

Lewandoski's brace took his tally in this season's Champions League to a competition-leading eight goals, two ahead of Lionel Messi. Tadic's goals took him to five in the competition this season.