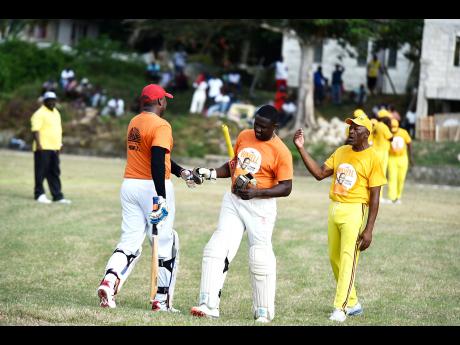 Franklyn Rose (left) and Wavell Hinds (centre) get heckled by a player from Delroy Morgan's XI after Hinds' dismissal at the Eglin Town Community grounds on Sunday. Hinds' XI won the 15 over contest by five runs.

Hinds, who is now the People's National Party's caretaker for Eastern Hanover, struck 40 from 24 deliveries, while Rose swatted 42 from just 17 to lead Hinds' XI to 129 for 6 off their 15 overs.

Dr Dayton Campbell, the member of parliament for North West St Ann, ended not out on two.

Morgan was not out on seven.

Hinds told WESTERN STAR that good sporting talent resides in Hanover and that the people are lovers of cricket.

"Certainly, they are hungry for cricket, it's a sports-rich community. The legacy of sports in Elgin Town is great, and we want to continue that. There are members of the community who are cricket and sports fanatics. There is a cricket field, and there are capable and competent people who are willing to put on the competition. We just have to coordinate those efforts to ensure everyone on the ground is in sync and we can move the process forward," Hinds said.

He however made it clear that his focus in not just on sports but on community development in general.

"We want to make sure that we start by getting everybody involved. There is not enough facility as yet for those different sports in this particular community, but for now, they will have to coexist in harmony while making sure we give opportunities to youngsters," said Hinds.