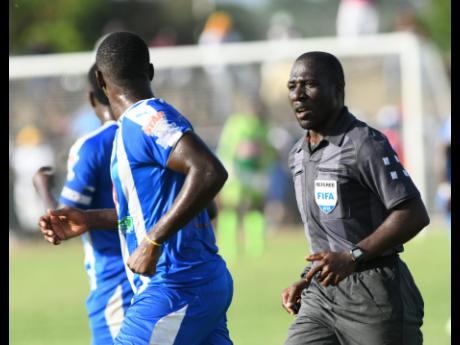 President of the Jamaica Football Referees Association (JFRA), Malica Reid, says outstanding allowances owed led to the absence of a number of referees for yesterday's round of matches in the Red Stripe Premier League (RSPL) competition.

Only one of the scheduled four RSPL matches went ahead yesterday as the referees failed to the show for the other games. That was FC Reno's 1-1 draw with UWI FC at the Frome Sports Complex.

Reid told STAR Sports that the Premier League Clubs Association (PLCA) was made aware of the pending action of the referees, but did nothing about it.

"The preliminary information that I have so far suggests that possibly it may stem from some travelling payments that have not been made, and some match fees that were not paid over for some of the months in this season," Reid said.

He added that matters were put to the PLCA but they did not act on the matter.

"We tried to communicate these issues to the PLCA as early, I think, as Monday, that this was coming," he said. "I guess the PLCA treated it as a normal situation, and hoped that they could have put the referees in a particular frame of mind to be able to cope with all the difficulties that they were experiencing, and still see if they could service the games. But apparently it did not materialise."

Reid said that his association is in dialogue with the Jamaica Football Federation and PLCA in a bid to resolve the issues with swiftly.

"From what I understand, there are some other issues that are still there to be resolved, so JFF, the PLCA and Premier League referees are in discussions in relation to the issues," he said.