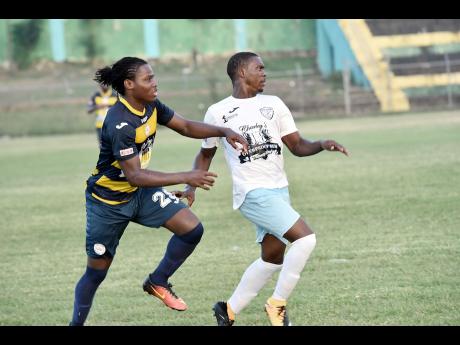 Allan Ottey (right) then of Faulkland FC and Grand Palladium FC's Carlington Ewart chase the ball in their JFF Western Confederation/ Charley's JB Rum Super League encounter at Jarrett Park in January 2018. Ottey is close to returning to the league as he is a transfer target for Falmouth United.

While pointing out that he is not fully aware of all the details regarding these potential transfers, Weatherly believes Campbell's move is a lot closer to finalising. He, however, said he will be meeting with the management later to find out clearly.

"We are looking at both of them. I hope everything will work out to boost our squad," said Weatherly. "There are other players that we are talking to also that we can't really disclose, but definitely we are working on them."

Weatherly is excited about getting a physical and imposing presence like Campbell, who also brings a wealth of experience and knowledge of the game to the defensive unit.

"Based on his physique and knowledge of the game, it would be a very big asset for us. It would also give us room to do a lot of other things in terms of our system of play going forward," Weatherly, who believes Campbell's leadership quality will also be vital, said.

"Also part of it is the mental aspect of the game, with his knowledge and how he expresses himself on the field. He also commands a team and carries out instructions. His experience and Cordell (Simpson) around there will definitely give us a big boost," he added.

Weatherly welcomes reuniting with Ottey, with whom he won the RSPL title at MBU in 2014. He is also looking to get the best out of a player who has not been at his best in the last couple of seasons.

"Allan has been around me from time, and most teams tend to think that I get the best out of Allan. I have known him since he was in diapers, so he is very close to me. Him being here with me is a welcome sign and a plus," Weatherly said.

"It will definitely add to our offensive side of the game, because I think we need to be scoring some goals. To be successful, I think you need to have a go-to person and he can be one of those persons."

This would come as heavy blows to the RSPL outfits as Reno, with 17 points, sit in 10th on the twelve team table, just one point above 11th place MBU, who occupy one of two relegation spots.