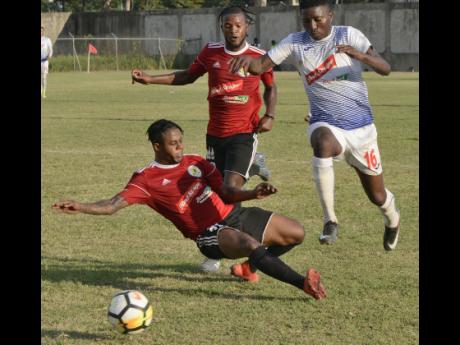 Mount Pleasant coach Donovan Duckie lamented his team's poor run of form in front of goal as they went down 1-0 to defending champions Portmore United at the Prison Oval in their Red Stripe Premeir League (RSPL) game yesterday.

Ricardo Morris' spectacular 39th-minute volley gave the hosts all three points and put them on 35 points, one point atop the table over Waterhouse, who play Cavalier this evening.

Duckie has seen his team win just once in their last eight games. They have scored just three goals during that period and those goals came in two matches.

"We have problems everywhere in the attacking third. We have been creating numerous number of chances (but not scoring). But I am excited with what I saw today, with our movement in the final third, as we did a lot of work in the two-week break in the opponent's half," he said.

However, he believed they had a legitimate goal in the final minutes of the game when Cordel Benbow's strike was called back for offside.

In an intense and high-quality first half, both teams gave a good account of themselves and created good chances to go ahead.

However, six minutes before the break, Morris broke the deadlock when he latched on to a headed clearance and hit a sumptuous volley into the top corner for the game's only goal.

Portmore had a great chance to go two nil up in the second-half but Smith blasted his penalty kick over the bar after Surinamese Donnegy Fer was pulled back inside the area.

Moments later, Mount Pleasant thought they had an equaliser when goalkeeper Shaven-Sean Paul spilled a corner, but Benbow was blown for offside after he controlled the initial shot from a Mount Pleasant player, before scoring from three yards.

Portmore's coach Shavar Thomas said it was another tough outing for his team. "It was a tough game today, as have been all our games this season. When teams know they are playing Portmore, they put out their all and we get these types of games," he said.