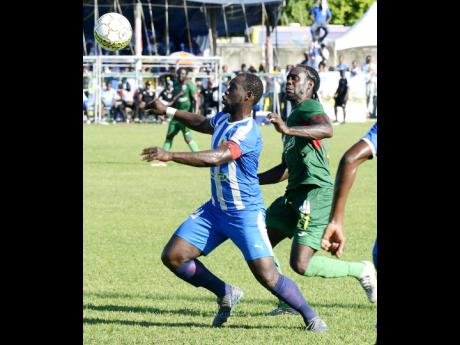 Veteran striker Devon Hodges is begging for patience from the Mount Pleasant supporters, after a string of poor results, which have seen fans of the St Ann team growing increasingly frustrated in the team's Red Stripe Premier League (RSPL) form.

The big-spending Mount Pleasant Academy have won just once in their last eight games, and have scored only three goals in two of those eight matches. As a result, the passionate fans of the St Ann based club have grown restless, with some calling for the sacking of coach Donovan Duckie.

After the team's 1-0 defeat away to Portmore United in their last outing on Sunday, the former national player is calling for calm and is remaining confident they will turn things around and challenge for the title.

"Today's (Sunday's) result was a very disappointing one. We are on the road but on the road, we always try to get something, whether three or one (point) but today it wasn't to be. We have to just try get back on track, it's still a long season and we can finish in the top six, so we just have to refocus, look at where we are making the mistakes and come again," Hodges said.

"We have a very good fan base and we hope the people can be a bit patient with us until we get back on track. The team is still in a good mood. We still have our togetherness, we just need to sharpen up on some plays and our decision-making and I am confident we will get it right, so we will definitely turn this around and regain our winning form," Hodges told RSPL Rumble.

Despite spending excessively on big name attackers in the summer for their debut RSPL season, Mount Pleasant Academy have struggled in front of goal, scoring a mere 13 goals in 19 matches, while conceding 12 in the process.

"I think the goal-scoring aspect, when we started the season, was pretty good. It's just that now we need to make better decisions in the final third and be a bit sharper and we will get back the goal scoring.

"At the moment my form is not a hundred per cent and I had a good start to the season. So we have to just go back in training and get in some more background work and come back and try to find some form for our team," he stated.

Mount Pleasant are currently in fifth position on 27 points, the same as sixth placed UWI FC and two more than Tivoli Gardens, who fall a further position behind.