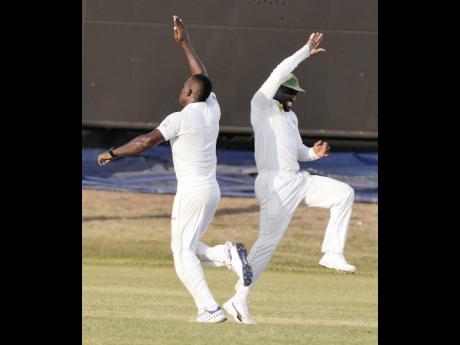 Fabian Allen, who received his first call up to the Windies team for the tour of Bangladesh in December, said his first time on tour was 'tough,' but it was a great learning experience. However, the Jamaica Scorpions all rounder wants to increase his tally of centuries in the regional competition now underway.

"When it is the first time of your career in the Windies team, it is always going to be tough. But it was a learning curve for me. Each step I take, I want to keep learning and keep doing what I am doing better," he said.

During the recent tour of Bangladesh, Allen missed the Test series, played one One Day International, where he made six, and participated in two of the three Twenty20 games, scoring zero and eight in the second and third games respectively. However, he has taken a lot of positives from that tour and is looking to use what he has learned to make himself a better player.

In the Scorpions' last game against the Windward Volcanoes, Allen made seven in the first innings and a duck in the second innings, but he is convinced that his best days are still ahead of him for the regional tournament this term.

"I'm looking to contribute as much as I can," he said. "I am just coming back from the Bangladesh tour so I have experience up top, so I am looking to execute and try to help the team move forward. Going forward, this is a big deal as every one wants to play on the team, but you just have to do what you do. It's a new year and you have to take each opportunity you get and try to do great things by executing and moving forward," he said.

The Scorpions lost their two opening games in the Regional 4-Day competition, against the Barbados Pride and the Windward Islands Volcanoes. They will be looking for their first win when they take on the Trinidad and Tobago Red Force at Sabina Park, at 10 a.m. today.