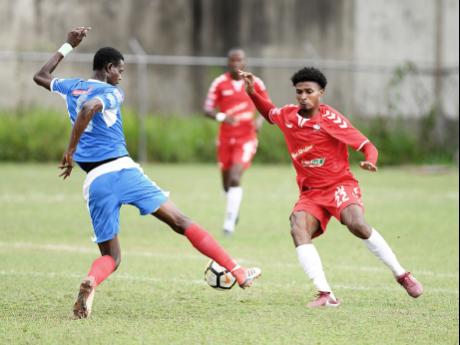 Portmore coach Shavar Thomas, says he did not regret leaving out a number of regular starters in the team's 2-1 defeat to UWI FC in their Red Stripe Premier League (RSPL) game at the Spanish Town Prison Oval yesterday.
UWI, through goals from Andre Bernal (19th), and Akeem Thenstead (55th), surprised the hosts, who got their goal courtesy of Javon East. But Thomas handed starts to forward Hardley Barnes and Surinamese midfielder, Donnegy Fer and left out leading striker Rondee Smith, and seasoned attacker Cleon Pryce, while talisman, Ricardo Morris was not even on the bench.
But Thomas defended his decision, saying he needed to rest some of his top players, even though the lack of quality was evident in the first-half.

"We can't use 12 or 13 players to play back-to-back games," he said. "If you check the minutes on our players, the amount of games we have played over the last month has been taxing on the body, and we have to look forward as well, because we have the (CONCACAF) club championship coming up in a few weeks, so we have to make note of those things. So we have to look at the minutes that our players are putting in, while looking at the fixtures with the games coming quick and fast, so we need to pace everyone."
Nevertheless, Thomas was very disappointed with his team's showing, and he promised a speedy recovery against Mount Pleasant on Wednesday. "I'm very disappointed with our performance. It's not like UWI came and dominated. It was a result of our bad play, poor decision making and individual moments, especially in the first-half where we gave up a soft goal.
"But we came out in the second half and put UWI on the backfoot and forced them to make mistakes and we got a good goal, but the next thing you know, another mistake as the team let the player (Patrick Brown) dribble straight through the middle without stopping the play, so I am disappointed, but I'm looking for a quick turn around on Wednesday," he stated.

Portmore continue to lead the points table with 39 points, while UWI (30) leapfrog Tivoli (28) into sixth, and are tied on points with Mount Pleasant. Cavalier sit second with 37, then Waterhouse follow on 34, and Arnett fourth on 31.