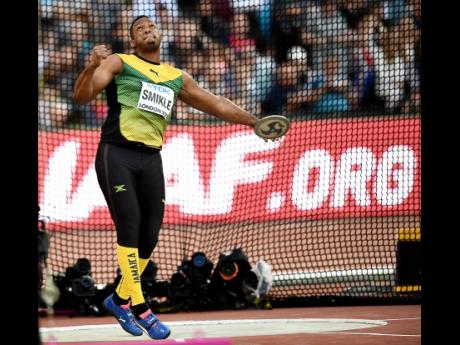 Depth in the discus at the world level is trending up again and Jamaica's Commonwealth Games runner-up Traves Smikle is ready to meet the challenge.

To make progress, Smikle is working to become more consistent so he can master the 67-metre barrier more often.

Second to training partner Fedrick Dacres at last Saturday's Fuller Memorial on the grounds of Manchester High School in Mandeville, Smikle scored with his best season opening throw ever, 62.59 metres.

When the competition was over, he sketched his goals for this season.

"Well, I'm trying to invoke some more explosiveness in my training regime", said the Calabar High School and University of the West Indies graduate.

In a reference to coach Julian Robinson, he expanded, "We're trying to refine and better the training technique so we can (be more) consistent."

At the Fuller Memorial, he had two other marks over 60 metres, but he wanted more.

"In order to be competitive at the senior level you have to be consistent, as my training partner demonstrated," he remarked about Dacres, who put three efforts past 64 metres.

In 2018, nine men threw past 67 metres compared to six in 2017, and Smikle sees that distance as the new benchmark.

"To be world-class in this era, you have to be at least 67 and up to matter in the throwing world," he stated.

Smikle finished eighth in the event at the 2017 World Championships, where the bronze medal went to American Mason Finley, who threw 68.03 metres.

The smooth lefthander was among that elite group last year with a personal best of 67.72 metres.

Asked if he was up to the challenge of throwing farther on a consistent basis, Smikle answered, "Yes, most definitely."

The 2012 Olympian enters 2019 after winning silver at the North American Central American and Caribbean Championships and bronze at the Central American and Caribbean Games, in addition to his runner-up spot at the Commonwealth Games. His personal best came at the Big Shot Invitational, hosted by Excelsior High School, and his second-best meet, won with a 67.14-metre throw, was in Halle, Germany.