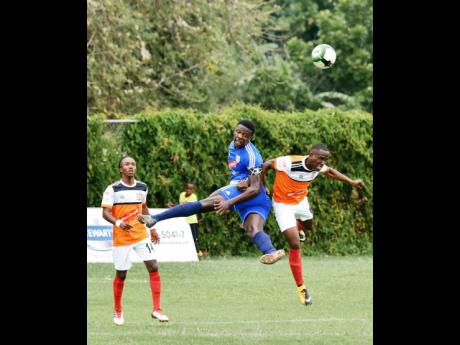 Shaquille Notice (35th) and Kemar Beckford (80th) were the scorers for Mount Pleasant. The victory has moved Mount Pleasant from fifth to fourth in the table on 33 points. Dunbeholden remain second from bottom on 19 points. Thomas said his team played well, so he is very elated for the three points.

"It was a good game because it was a workman like performance. We had problems in getting goals and we got two in this match and I am happy for that," Stewart said."

We are not consistent in scoring goals this season, so this was a good performance for the team."

Mount Pleasant dominated the early exchanges with the speedy and skillful Cardel Bendow tormenting the Dunbeholden defenders with his swift dribbling skills and off- the-ball movement. However, they had to wait for the 35th minute when Notice arrived at the near post to head home a free kick from Ladale Richie, past goalkeeper Eric Edwards. Narado Brown came close to scoring the equaliser for Dunbeholden on the stroke of half-time, but his powerful shot from 12-yards was well saved by goalkeeper Kadeen Davis. Mount Pleasant, who also dominated the second stanza, wrapped up the victory when Beckford tapped home a cross from Devon Hodges with 10 minutes remaining in the game. Stewart said the victory is a very crucial one in the quest to secure a spot in the play-offs. We want to be in the top two, and we got three points in this match, so we welcome it," Stewart said.

Riegel Smith, coach of Dunbeholden, said: "We started off a bit slowly and I thought that our transition from midfield to forward was a bit too slow, because we gave up too much space and the Mount Pleasant team took advantage of this."