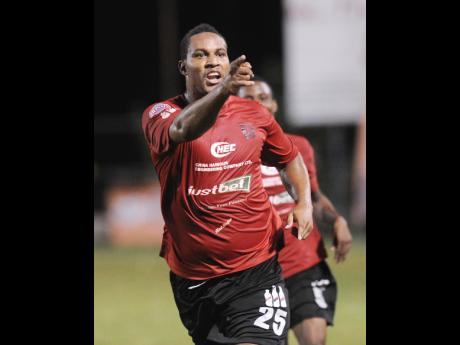 Veteran local striker Newton Sterling said he plans to do his best to try and save Red Stripe Premier League strugglers Dunbeholden from being demoted from the country's premier football competition.

Dunbeholden, who were beaten 2-0 at home by fellow promoted side Mount Pleasant on Wednesday, are second from bottom in the standings on 19 points.

Sterling, who started the season with Tivoli Gardens, made the switch to Dunbeholden earlier this month.

The lanky player, who is yet to score a goal this season, said he made the switch from Tivoli Gardens due the lack the playing time. He said that he has settled in nicely with his new teammates at Dunbeholden and he is ready to help lift the club out of the relegation zone.

"I just needed some playing time and I figured I could get that here, plus the coaches are my good friends and they need a hand," said Sterling, who netted five goals in last season's competition while playing for Arnett Gardens.

"My aim is to try and move them out of it (relegation zone), but it is going to take some work and that is what I am here to do, and I plan to do my best to get them from there," he said.

"I feel that I can have a positive impact on them because I am not the only player. There is also (Leon Strickland), who is a veteran player and there are other players that are here who can help the team win games," he said.

He added that Dunbeholden have a very talented squad, but most of the players are very inexperienced and this is what has been hampering the team's performance this season.

"When I watched them in training, they looked really good, but it's just experience beating them. So, hopefully, I can bring that to the team for the next games coming and try to move them from the spot that they are in," Sterling said.