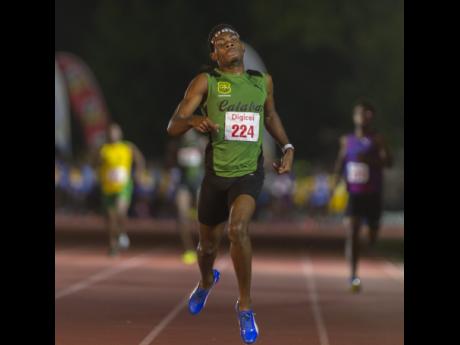 Gladstone Taylor / Multimedia Photo Editor Calabar's Christopher Taylor wins the final segment of the Class One boys 400 metres, with a time of 45.82 at the McKenley Wint Track and Field Classic held at Calabar High School on Saturday, January 19, 2019.

After a great 2018 season where, among other things, he won the national senior title in the 400m, Calabar's outstanding quarter-miler Christopher Taylor is promising an even better year after an amazing opener at the McKenley -Wint Classics on Saturday.

The last time Taylor took to the track in a competitive race was at last summer's IAAF World Under-20 Championships in Finland, and despite pointing to race-rust in an interview a few hours before competing in front of his home supporters on Saturday, Taylor looked like a well-tuned machine as he sent out early warning shots.

At approximately 6:47 p.m., Taylor entered the track in the 27th and final heat of the 400 metres to deafening applause from the partisan crowd, which was anxious to see his response to Petersfield High's Antonio Watson, the IAAF World Under-18 one-lap champion, who posted 47.55 seconds in the fifth heat, the fastest time up to that point.

Drawn in lane two, Taylor faced off with former St Elizabeth Technical athlete Jauvaney James. James kept in touch for the first 300m, but he could find no answer as Taylor pulled away in the final 100m, stopping the clock at an impressive 45.82 seconds - the fastest time in the world so far this season.

"I felt really great knowing that I came out here under one order, to use the opportunity as a training session, and the plan was to execute properly and that is what I did," said Taylor.

"Running this fast time means a lot for me, knowing that I am behind the others in training, and because my focus is on retaining my title in the 400 metres at the senior level, I am very pleased," continued Taylor, who will also be looking to defend his title in the event at the ISSA/GraceKennedy Boys and Girls' Athletics Championships in March.

"I was really motivated by the fans and also after getting an award the night before at the RJRGLEANER Awards function, these really pumped me up to perform well, and I really want to thank the fans for the support, and I want to promise them better things. If they thought 2018 was great, then this year will be even better."

Later in the night, Taylor showed that he was not that rusty after all, as he posted the fastest time on the day in the 100 metres, after clocking 10.55 seconds to win his heat, upstaging teammates Michael Stephens, 10.68, and DeJour Russell, 10.70, seconds, who were both also making their season debuts at home.