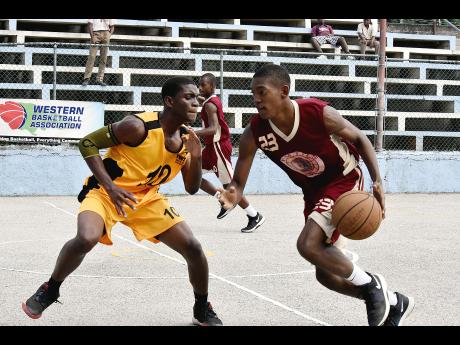 Dave Black, the coach of Herbert Morrison Technical High's basketball teams, is confident after both the under-16 and under-19 teams took 1-0 leads in the best of three ISSA Western Conference finals at the MoBay Cricket Club Court on Friday.

The under-16 team defeated Cornwall College 65-40 with Anthony Thorpe (28 points) the main destroyer. He was aided by Demar Clarke and Kyle Fraser who both scored 11. Romario Senior top scored for Cornwall with 16 points.

In the other game, the under-19 team continued their invincible run with a 63-45 ictory over York Castle High. David Gordon was the top scorer for Herbert Morrison with 27 points.

"It's pretty good. I think we just have to sharpen up on the defensive side of the court and we will be OK in game two. I also see this as a good stepping stone for us going into the all-island competition," said Black.

Black is impressed by his under-16 team's key player, and the competition's leading scorer Thorpe. Black believes that Thorpe's athleticism and passion for the game have made him a standout player and is looking forward to him taking the team all the way.

"Anthony has been leading this team from he was14 years old with the same set of players. So it's just for him to continue building on his game going forward," said Black. "He has a pretty good jump which also helps him in the game of basketball. The next thing is his passion; he will put in the extra work to get better ... ".

Black said that Thorpe is pretty confident of leading the team to the all-island title.