Walker is a special talent – Thomas 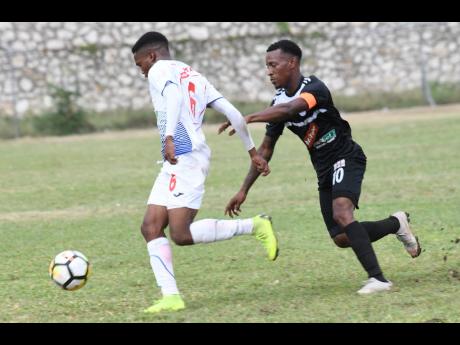 Portmore coach, Shavar Thomas, hails schoolboy Lamar Walker as a ‘special talent’ after the youngster continued his impressive display in the Red Stripe Premier League in his first season.

Walker, who helped Clarendon College to this season’s Dacosta Cup and Oliver Sheild titles, has slotted seamlessly into the Portmore United set-up, with impressive performance over the last month and Thomas had nothing but praise for the 18-year-old after another standout performance from the schoolboy in their 3-0 win over Arnett Gardens at the Prison Oval on Sunday.

Walker, was not only outstanding on the day, he also had the highlight of the game on Sunday as he left his marker for dead with an audacious piece of skill down the right flank before setting up Andre Lewis to score easily from two yards.

“Most definitely (pleased), especially with the second-half, we came out and played Portmore football, putting the ball down, moving it, forcing our opponents to run and at the same time our quality kicked in so I am very happy,” he added.

Portmore moved eight points clear of the Cavalier and Waterhouse at the top of the league and look well set to capture the One million dollars prize for topping the preliminary on points.

But Thomas is still patient saying that the focus is to win one game at a time.

“That’s (prize money) not the main focus but it’s one of the objectives in winning. Our success will put us in the position to get the million dollars. We are more focused on game by game and preparing for the back end of the season,” he said.

Emelio Rousseau, Andre Lewis and Cleon Pryce all scored in Portmore’s convincing win over the former champions, but Thomas said the result is nothing to get carried away about as Arnett is a quality team that can beat any team, including Portmore, on any given day.

“We know when we play against Arnett, even the teams at the bottom of the table we have to come and prove ourselves, because of the successes we have and the players we have on show. Playing Arnett is a big game, a big team so beating them three-zero today it says nothing, because if we should play them in a next game tomorrow, Arnett is a good team with quality players that can come up trumps.” he stated.