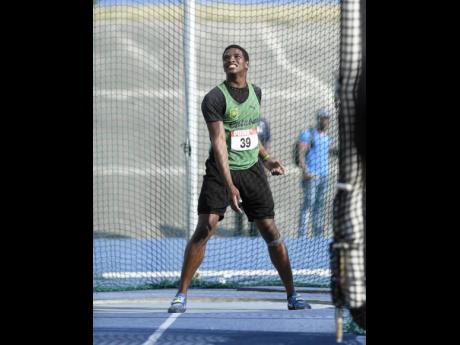 AFTER winning gold in the discus throw at the IAAF World Under-20 Championships in Tampere, Finland, last year, Calabar High School Kai Chang is the overwhelming favourite to take the gold in the event for Class One boys at this year’s staging of the ISSA-GraceKennedy Boys and Girls’ Athletics Championships.

But the 19 year old has his eyes set on a bigger prize and will using the championships as a stepping stone.

“My preparation for Champs is really to condition myself for Senior Trials and to throw the 2K implement as I am not eyeing Champs as a major event but I will do the best to ensure that I give maximum points to my team. Although I do not expect much throwing the junior weight of 1.75 m , but with God’s willing and proper condition with me and my coach, I think on a good day I can get 64 metres,” he said.

Chang followed up his World Under-20 title with some immaculate display throughout the 2019 season as he has thrown as far as 61.46 metres done in early January at the Danny Williams JC Pure Water Meet.

He threw 58.91m to break his record at the Corporate Area Championships last week.

But he will be chasing his first gold medal at these Championships after a second-place finish last year behind St. Jago High School’s Roje Stona.

“ It is a good feeling being around my teammates at Calabar because they see me as one of their leaders and there is good comradeship among the guys because of the respect shown by each other. I think I am an inspiration to them and this really spread throughout the whole team,”he said.