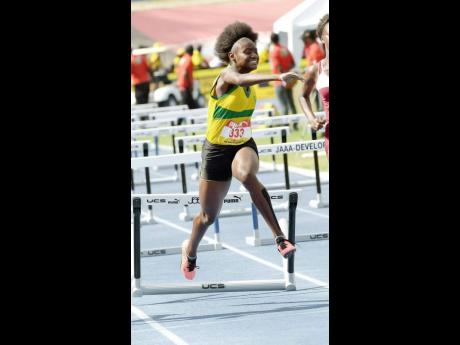 A year ago, Hydel High School’s Ray-donna-Lee became the fastest-ever female hurdler in Class Two after a smashing 12.95 seconds to erase the one-year-old record of 13.04 seconds set by former Vere Technical athlete Britany Anderson and, in the process, became the first athlete in the class to go sub-13 seconds in the event.

Fast-forward one year, and this amazing record is under severe threat as last year’s fourth-place finisher in that race, Ackera Nugent of Excelsior High School, looks set for something special in the event at the ISSA/GraceKennedy Boys and Girls’ Athletic Championships.

Nugent, who was plagued with injuries for most of last year, found her best form at the Youth Olympic Games in Buenos Aires, Argentina, after picking up bronze in the 100 metre hurdles in a wind-aided 12.83 seconds.

She had fans in a frenzy at the Youngster Goldsmith Meet in February when she posted an impressive 12.89 seconds to win the event. Not only did she shatter the national record, but she also posted the fastest time by a female under the age of 18.

Nugent stated that she was shocked after that performance.

“I was very surprised with the time because I did not expect to go under 13 seconds, although I was aiming for a personal best somewhere in the low 13s, and also seeing that it was so early in my preparation,”she said.

She is yet to compete in the event after that run but is going into the championships full of confidence.

“First thing for me is to go out there and win, and if the record comes, then I will take it, because anything can happen on the day,” she said. Nugent is also looking forward to her rivalry with St Jago High School’s Crystal Morrison, who is the reigning Carifta Games Under-17 champion in the event and who finished second in the finals last year. I like to compete with Crystal, as we are very close friends, and when we compete against each other, it brings out the best from both of us,”she stated.