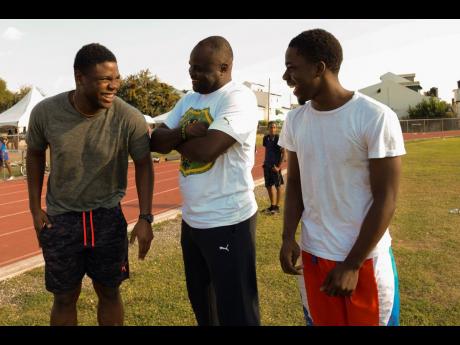 De’Jour Russell is aiming to create history by becoming the first athlete to win the Class One boys’ 110m hurdles in three consecutive years.

The World Youth Champion broke the record on the first two occasions with times of 13.21 and 13.10, and he confident he can ‘three-peat’ this year.

But he will have to contend with Wayne Pinnock and Akeem Cargill from Kingston College, who are ranked No. one and two in the class so far this year.

“I respect every competitor, and both are pretty good competitors, as I never under-estimate any one I go up against. But it will not be an easy task for them, and if they are thinking about one-two, they can think again, as I have a very good teammate in Schavon Carr, who I have a lot of confidence in, and once I am on the track with him, there will always be added motivation for him; and we have big plans, so look out for that,” he said.

Russell, who has only competed once for the season, when he finished third overall in the Class One 100 metres in 10.70 seconds at the McKenley/Wint Classics, told STAR Sports that he is in good shape despite rumours over the past few weeks that he is injured and will not compete at the 2019 staging of the ISSA GraceKennedy Boys and Girls’ Athletics Championships.

“What can I say? This rumour about me being injured has been going on every year, and every time I have proven them wrong, so this year will not be different,” said Russell. “There is no specific reason why I haven’t competed, it is just coach’s decision. I am just in the lab to perfect me and that’s all what matters, as Champs is the aim, not weekly development meets.”