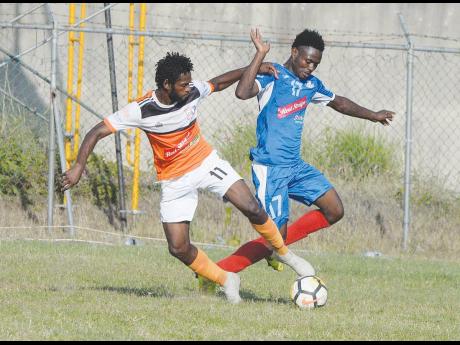 Portmore United’s Andre Lewis (right) in a tussle for possession with Shevan James of Dunbeholden during their Red Stripe Premier League match at the Spanish Town Prison Oval on Wednesday. Lewis scored in Portmore’s 2-0 win.

Portmore won their third league title in four years and a cash prize of $1 million after topping the table with 66 points at the end of preliminary round of the competition on Wednesday.

Lewis, who helped Jamaica qualify for the 2011 Under-17 World Cup, told STAR Sports that the players are very determined to retain their title and therefore they will be pulling out all the stops to ensure that they come out on top.

“The mindset going into the play-offs is great by everyone and you see it every day in training because we want to win and that is the aim,” Lewis said.

“The players are very confident, so we just have to go out on the day and execute our game plan. Once we do this, then we will be victorious.”

“The 24-year-old Lewis, who has one senior cap under his belt, rejoined Portmore in January after a five-year stint in the United Soccer League (USL) in the United States.

He was drafted number seven by Major League Soccer team Vancouver Whitecaps in 2014.

However, he was loaned out to Charleston Battery and Whitecaps FC 2 (Vancouver’s affiliate) in the USL, before spending two seasons with the Portland Timbers 2 in the same league.

The crafty midfielder has netted three goals and dished out two assists since his return to the island and he said he is hoping that his performance in the RSPL will help to secure a permanent spot in the national team.

“I think I am improving with the team and with my performance. I’m also adapting to the fields, so credit to the coaches here at Portmore,” he said.

“That is always your dream to play for your country, but no one has control over that. The coaches will see me one day, so, hopefully, I will get the chance and I am just waiting and doing my best. Hopefully, I can get a chance,” he said.

“I played a few minutes for the national team when I got my first cap, but I am yet to play a full 90 minutes, so I am just waiting on that day to come,” the former St George’s College Manning Cup standout said.