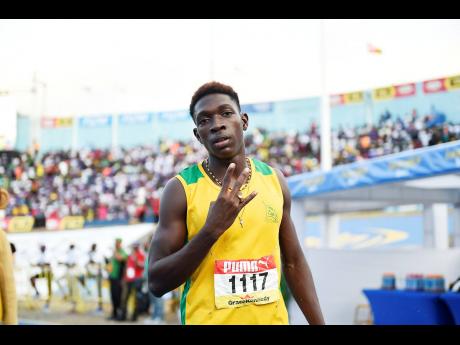 Coach of the Petersfield High School track and field team, Machell Woolery, said the objective is to remain in the top 10 and move closer to the elusive top five spots at the ISSA Boys and Girls’ Athletics Championships that start today.

Petersfield has become one of the standout performers from the western region, tallying some 69 points to finish seventh on the boys’ side, and 51 points to finish eighth in the girls’ section at Champs last year.

“Well, we are still planning and working. We aim to finish in the top 10 for both the male and female teams.

“The objective each year is to break into the top five. It is a challenge for us overall as a team, but we are working on it and still not counting ourselves out of the championship,” Woolery said.

When asked about their strengths and weaknesses going into this year’s championships, Woolery told WESTERN STAR that their strength remains the same in the throws.

“In terms of the boys’ team, we are still strong in the throws. We have some top five ranked athletes in different areas, the Class 1 javelin, shot put and discus.

So we still expect to feature there heavily. Outside of that, it’s the sprints on the track; also, the hurdles is coming to the forefront this year and we want to maintain that,” Woolery said.

He said that he wanted an injury-free team going into the championship.

“We have some athletes that were nursing a bit of niggle here and there, but we are working on having them in the best shape for the championship,” he said, while admitting that the distance programme was giving them ‘hell’ so far.

“On the male side, we wanted to get our distance programme to a better standard.

“I’m hoping that the kids going to Champs can really step up ... and shed some light on the distance programme,” he said.

Despite not putting any pressure on his developing hurdles programme to score big for the team, Woolery is looking to pick up some crucial points in the section.

“Most definitely, we are looking to pick up points and even medal in the class two boys and girls open.

We expected to have a pretty decent championship where hurdles is concerned, if all goes well,” he said.