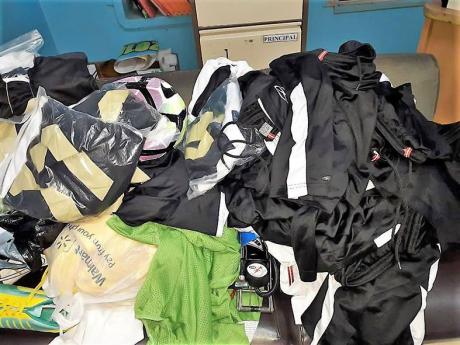 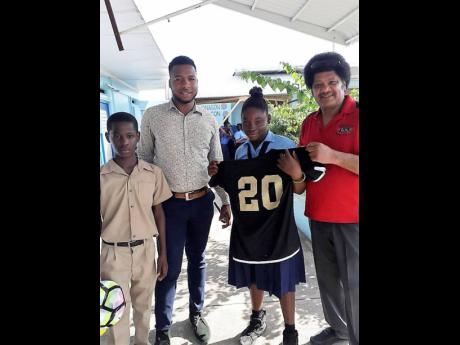 Azan, who came to the island to attend his beloved brother’s funeral, which was held on Sunday, said in the midst of his sadness, giving to the school put some joy in his heart.

On his last visit, he was told of the school’s need for gear to outfit the football team. So he returned with jerseys, footballs, pump, and sneakers for the team.

Azan, who hails from May Pen, Clarendon, migrated to live in Tennessee in the US. He did a stint in the US army, and is now a pastor in Tennessee.

He said he has never forgot his own struggles in Jamaica and it has been the motivation in forming the charity, which sees him making the trek to Jamaica twice per year – August and December – where he hosts a back-to-school and children’s treat.

In addressing the students on Monday, Azan reminded them that they can be anything they want to be.

“Never let anyone tell you that you can’t be what you want to be. If you have a dream, go after it,” he told them.

A grateful principal, Denise Moodie, was elated that Azan selected the school to give support.

“This year, our footballers have been doing very well in competitions, and with the donations received, this will boost their confidence in other competitions,” she told the CENTRAL STAR even as she made a plea for netball jerseys, balls and bibs for the girls.