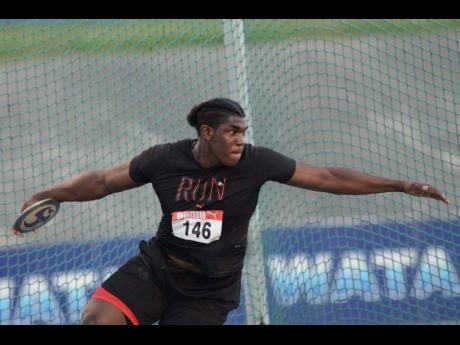 Swedish giant Daniel Stahl caught the attention of the world with his big discus win at the Doha Diamond League meet earlier this month. Among those admiring Stahl's 70.56 metre throw in Doha is Jamaica's Pan-American and Commonwealth champion Fedrick Dacres, who is looking forward to competing with the Swede again.

"Awesome stuff, because you know I think it's great for the sport," Dacres said after winning at the JAAA All-Comers meet at the UWI/Usain Bolt track on May 18, with a mark of 67.10 metres. Stahl won with a distance of 70.56 metres, but the European champion had two other big throws at 70.49 and 70.32.

"Seventy, it's really good to see. Hopefully I get a chance to take him on," the Jamaican continued, perhaps with his mind on the Stockholm leg of the Diamond League on May 30, where both he and Stahl are on the preliminary list of entries. "I would have loved to be in Doha but it didn't happen, but it's life."

Dacres registered his personal best and national record of 69.67 metres in Stockholm last year and wants to reach past the 70-metre barrier this year. "My mind is further out, but you know I wouldn't mind the 70 at this point,"he said.

At Saturday's meet, the 25-year-old Jamaican won with a distance of 67.10 metres. "Today was a good night of throwing; yes, 67 is not bad, it is stadium conditions, no wind, anything, so I'm good," he said.

Hungry for progress, the Julian Robinson- coached thrower wasn't completely satisfied. "I really feel I could do more, but that's life, " he said.

At the last World Championships, Lithuanian Andrius won ahead of Stahl, American Mason and Dacres in fourth, with the left-handed Smikle eighth.

Stahl, Dacres, Finley and Olympic champion Christoph Harting will all be in the throwing circle in Stockholm.