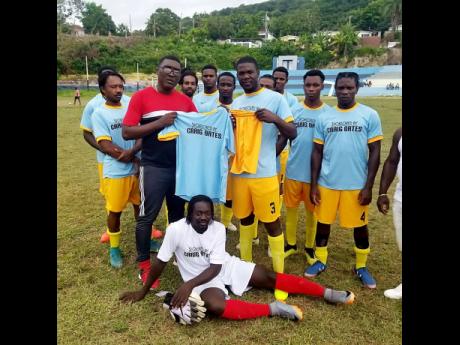 First vice-president of the Hanover FA Craig Oates, who is also the founder of the Hanover Academy, said his near-$400,000 sponsorship of three teams in the Hanover Major League is just part of the whole initiative to develop youth football in the parish.

“I see the need, as a lot of the clubs are struggling financially. One of the best things one can do for a club entering a competition is to give them a set of gears. This helps them to offset some of their expenses and allow them to operate more freely and efficiently,” Oates said.

He said that he has committed for the next three years to sponsoring Hopewell Chargers, Montpelier FC and Clermont FC.

“We are also looking to have a mentorship programme for the youths, especially in the summer where we can get people to come in and curb their mentality. We have done it before at the Hanover Football Academy, where we have brought in the likes of Theodore ‘Tappa’ Whitmore, Wendell Downswell, Dr Dean Weatherly and past players to share their experiences and what is needed to go far in the sport.” he said.

Oates, who reminisced on the Legends FC being the last team to play in the Premier League in the 1996-97 season, believes that with the support of corporate Hanover and the right infrastructure, they can reap success.

Three weeks ago, Hopewell United was edged out of a Red Stripe Premier League play-offs spot after going down 2-1 to Wadadah in extra time of the JFF Western Confederation Charley’s JB Rum Super League semi-finals.

“What we really need is the business community. Most of the hotel sector in Negril is in Hanover, and we also have a lot of other businesses in the parish. We need these businesses to start pumping money back into the parish but also we need clubs to be organised so when corporate is pumping money in, they can see that it’s going to a worthy cause,” Oates said.

He said that he was seeking contribution to tackle development not only from a football standpoint, but also as a crime-fighting initiative.

“What you find out is that when youths are more engaged in sports, crime tends to be less,” he added.