The men’s long jump will be hot – Mills 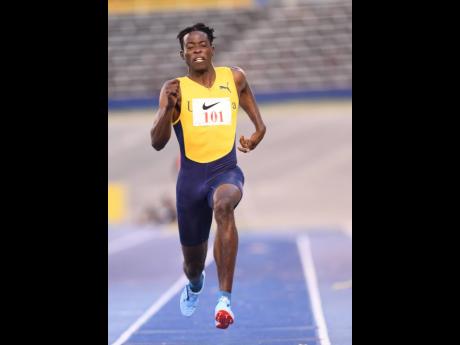 Glen Mills, the meet director for the Racers Grand Prix, is eager for the men’s long jump at the this year’s staging of the meet to get under way as he believes he and his colleagues have put together a competitive field.

With the ever-improving Tajay Gayle as the main headliner, Mills have acquired the services of Cubans Maykel Masso and Maikel Vidal who, like Gayle, have gone over eight metres this season, to line up against Demar Forbes, who has been a staple at the meet since its inception, reigning national champion Ramone Bailey and schoolboy Wayne Pinnock of Kingston College.

“We have put together a strong long jump field where eight of the competitors have gone over eight metres. And quite a strong contingent of Jamaicans, and we have the Cubans who are always strong in the jumps. The fans are going to be seeing a real contest out there,” Mills told The STAR yesterday.

“Forbes, who is always here, will want to see how he will fare among the Jamaicans who he will be competing against at Trials later in the month. For the first time I think he is under some pressure because several Jamaicans jumping over eight metres now.”

Forbes, who has not hit the 8 metre mark this year, is staring into the backs of Pinnock with 8.05 and Gayle 8.30 and with the reigning national champion Bailey rounding into form, Forbes faces the possibility of missing the top three spot to represent Jamaica at the World Championships in Doha in September.

Gayle is ranked number two in the world this year and his 8.30 earlier this year at the National Stadium ranks him as the third farthest Jamaican long jumper.

“The thing about us is that we always try to put together a field that will not have one competitor running away with the event. The fans want to see real competition and I think that is what we will see in this event and others too,” Mills said.

The fourth staging of the Racers Grand Prix is scheduled for June 8 at the National Stadium.