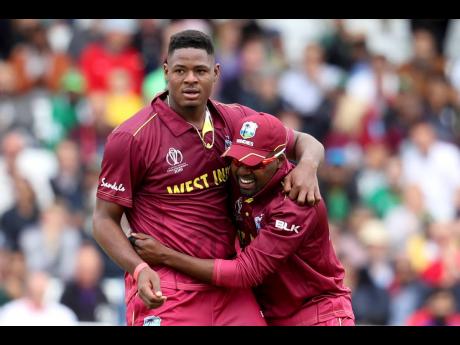 Reigning World champion Australian will hold no terrors for a confident West Indies, when the two teams clash at Trent Bridge in their second outings in the ICC World Cup on Thursday.

The last time the two teams met in a one-day international three years ago, West Indies went down by 58 runs in the final of a Tri-Nations Series in the Caribbean involving South Africa.

West Indies also came off the worse in the last bilateral series six years ago Down Under, suffering a heavy 5-0 whitewash but head coach Floyd Reifer says West Indies would be taking a "fearless" approach to the upcoming contest.

"We are not worried about them, we're just focussed on our game," Reifer said on Monday.

"We're focussed on playing our brand of cricket. These set of guys are creating the brand of cricket they want to play which is an aggressive, smart, confident, fearless cricket and that's the brand we're continuing to play no matter who is the opposition."

West Indies sent a strong warning to opposing teams when they crushed Pakistan in their opening game last Friday. Bowling with pace and hostility, they bundled out the Asian side for 105 and then raced to their target inside 14 overs.

ONE GAME AT A TIME

Australia, meanwhile, chased down Afghanistan's 208 in Bristol to make a comfortable start to their title defence last weekend.

Reifer said despite the opening win, his side were remaining grounded, focussing more on their execution than thinking about results.

"We're taking it one game at a time. Like I said, we're not under any pressure. We're just enjoying our cricket and focussing on playing the brand of cricket that we want to play," the former West Indies captain explained.

"We're focussing on restoring the pride in West Indies cricket so we have our reasons, we have our purpose for being here and we're just taking it one game at a time. At the end of the day, we'll be there July 14 [in the final]."

Reifer said West Indies' performance against Pakistan had been a pleasing one, especially with the team producing a clinical effort in the bowling and fielding departments.

"The performance was very good. What was really good about it is that the guys went out there and executed the plans," he pointed out.

"I thought we bowled aggressively, we stuck to our plans. The spell that (Andre) Russell bowled was the game-changing spell. I thought he bowled really fast and put the Pakistan batsmen on the back foot.

"Oshane Thomas bowled some quick balls as well. He came in and kind of polished off the job but all in all it was a very good team performance."

He continued: "In the field as well, we fielded well. The guys had a lot of energy in the field, the attitude to the fielding was there and all in all I thought it was a very good performance by the team."