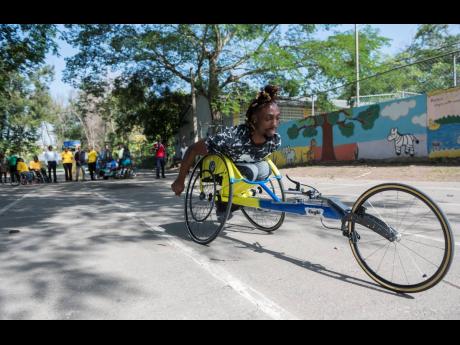 Keino Hewitt gets a feel of his new racing wheelchair, moments after the handover at the Sir John Golding Rehabilitation Centre on Thursday July 4, 2019. The chair gifted by the Tony Thwaites Wing will aid Hewitt in his aim to compete in the 2020 Paralympic Games. Representatives from the Tony Thwaites wing, University of Technology Jamaica, Jamaica Paralympic Association, and Sir John Golding Rehabilitation Centre were present.

Keino Hewitt thought that he was robbed of his dream of becoming an Olympian when a motor vehicle he was travelling in slammed into a bus on Michael Manley Boulevard leaving him paralysed from the waist down in September of last year.

But the University of Technology (UTech)student has found a new avenue to realise his dreams, and his determination now is fuelled by his 18-month-old daughter, Keiana.

The 23-year-old was gifted a racing wheelchair by the Tony Thwaites Wing of the University Hospital of the West Indies last week to embark on a mission to become the first Jamaican to win a medal in wheelchair racing at the Paralympics.

But his desire to compete again took much convincing as a cloud of depression hovered over him in the days and months after it was confirmed that he was paralysed.

"When it was first put to me that I could do this (wheelchair racing), I wasn't sure because I just wanted back my normal life. I wanted to do the things that I used to do and go the places I used to visit," he recalled. "So when my therapist, Yael Jagbir, put it to me first, I told her that I would need some time to think about it."

He continued: "I talked to my family about it and my girlfriend (Kimberly Leach), who has been a tower of strength for me since this happened, told me to remember that I have a daughter who is growing up fast and she will be watching me, so this could serve as some sort of inspiration for her."

Hewitt ran the 100 and 200m as an able-bodied athlete for UTech and he hopes to continue with the shorter distances in this new discipline. But he admits that he is a long way from knowing where his potential lies in wheelchair racing as yet.

"To be honest, we do not have the coaching or training facilities in Jamaica to help me to learn about it as I would want to, and so I am now seeking out ways to go overseas to get the training that I need to become good," Hewitt explained. " I would love if someone from corporate Jamaica can help me to do this because I know it will take money."

The Hospitality and Tourism major told STAR Sports that he hopes to also train at the National Stadium when he resumes school to complete his degree in August.

He is also concerned about how he will get around the campus as UTech is not yet equipped with wheelchair ramps.

"I was told not to worry about it and I hope that it doesn't prevent me from going back to school," he said. "And this is not just a problem with universities in Jamaica, but business places as well. Sometimes I would like to do things for myself but I can't."