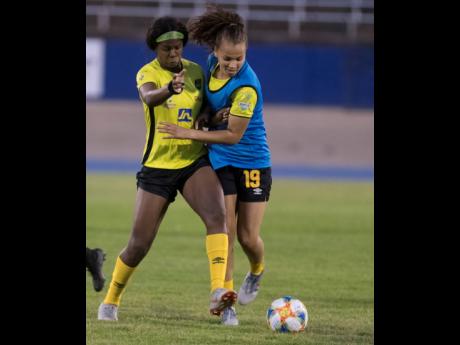 Khadija Shaw and Toriana Patterson (right) in a tussle for the ball during a Jamaica senior women’s football team training session held at the National Stadium on Monday, May 19. 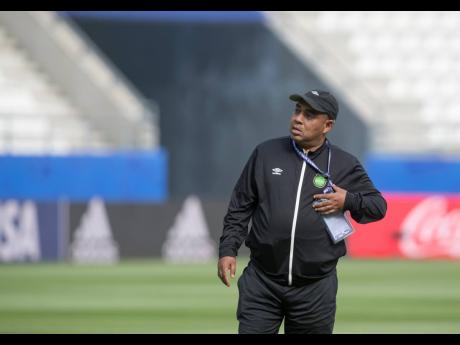 Jamaica's Reggae Girlz had arguably their best performance at the FIFA Women's World Cup last month in their final Group C game against Australia. It was the game that saw Hue Menzies' side score its first-ever and only goal of the tournament, through Havana Solaun. Further back on the pitch, one of the other stand out performers was deep lying midfielder Toriana 'Tori' Patterson, making her first appearance at the tournament. The 25-year-old, who plays her club football at ASD Pink Sport Time in the Women's Italian Serie A, added much-needed physicality in front of the Jamaica backline.

With injured captain Konya Plummer ruled out of the upcoming Pan American Games starting on Friday in Lima, Peru, Menzies is once again looking to Patterson to be the difference maker for the team.

LOOKING FOR A LEADER

"We're looking for Tori to be a leader, but in the position, Chyanne Dennis will be the one who will be stepping in to play [Plummer's] role. Rachel Smith's here, too, so we'll do a bit of a combination," Menzies told STAR Sports at the Jamaica Olympic Association's official press conference ahead of the Pan Am Games yesterday.

He said that he always had faith in Patterson's abilities, but did not use her in all three World Cup games because he did not want her to suffer burn out.

"We took 23 players and we wanted to utilise them as best as we can," he said. "We felt like if we played Tori (in) three games, we probably wouldn't get that excellent performance that she had in that game (against Australia), so we kinda partitioned her success. She was the player of the game in that game for us, and we feel she'll bring some leadership into this younger group, going into the Pan Am Games. We want to continue that with her because we feel she's gonna be a major part of our success, moving forward."

While the World Cup was seen as a stage for Jamaica to make a statement about its position in the women's game, it proved to also teach Menzies about his squad against high-calibre opponents. This accounts for him making changes to his starting 11 in every game. He said fans can expect more rotation throughout the Pan Am Games, as he gives younger and newer faces an opportunity to prove their worth.

"It's gonna be tough to scout us because we rotate so many times," he said. "But we have the depth and this is another opportunity for us to give them experience. We were changing line-ups in the World Cup, if we had the resources beforehand, we could be playing that level of teams before the World Cup. So we just had to fix things while we were there. Hopefully, this gives us an opportunity to prepare ourselves for the Olympics, as well as for the next World Cup qualifiers."

The Reggae Girlz's Pan Am Games campaign gets started against Mexico at Estadio Universidad San Marcos on Sunday.