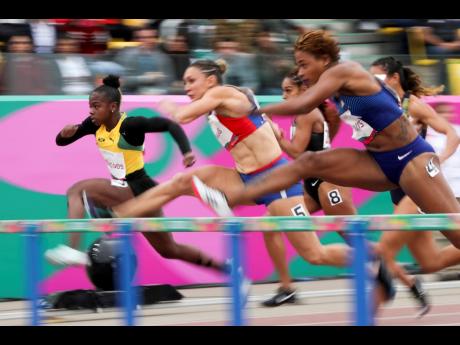 Megan Simmonds of Jamaica (left) competes in a women’s 100m hurdles semi-final during the athletics at the Pan American Games in Lima, Peru, yesterday. 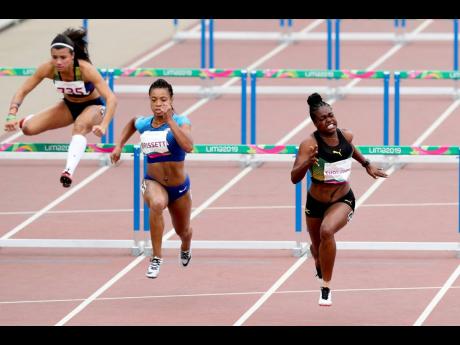 Yanique Thompson of Jamaica makes the final effort to win her semi-final in the women’s 100m hurdles yesterday. 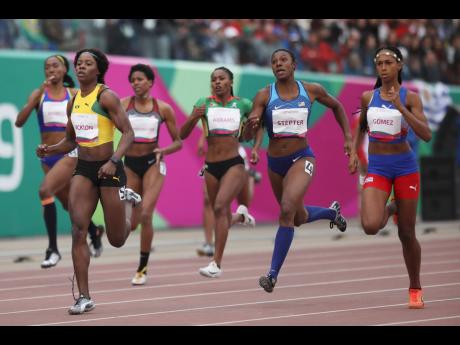 Shericka Jackson of Jamaica wins heat one of the women’s 400m semi-finals. 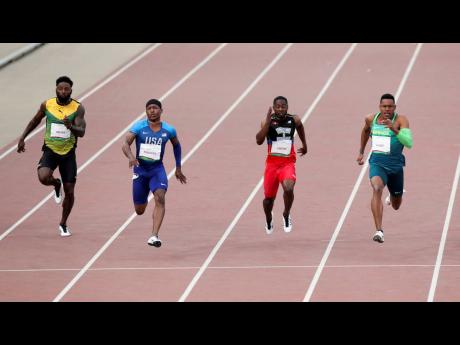 Michael Rodgers of the United States runs to win the men’s 100m final during the athletics at the Pan American Games in Lima, Peru, on Wednesday. Paulo Andre of Brazil won silver, Cejhae Greene of Antigua and Barbuda won bronze and Rasheed Dwyer of Jamaica finished fifth.
1
2
3
4

Sprint hurdler Yanique Thompson knows it's coming down to crunch time regarding the Jamaica Athletics Administrative Association's (JAAA) selection of its three women's 100m hurdlers for the IAAF World Championships in Doha, Qatar next month.

After a voided final at the National Trials in Kingston in June, the JAAA said it would make its selection based on the three highest hurdlers in the IAAF's world rankings as of August 16. That means Thompson, who suffered an ankle injury in a failed attempt at getting the final under way, must work hard to improve her ranking after the layoff saw her fall down the table.

A Lot of pressure

She says this has made things more difficult for her than her rivals for the three spots.

"It puts a lot of pressure on me because I'm the one who came out of the Championships with an injury, so I wasn't able to race and my rankings kept falling," she said. "I have to work harder than everybody else because I'm at a disadvantage because of the injury at Trials. But I'm just coming here and, hopefully, put myself in a better position to gain their selection. I'm rusty because I haven't raced a lot."

Thompson placed herself into today's 100m hurdles final here at the Pan American Games after winning her preliminary round in a time of 12.90 seconds yesterday. Despite the victory, it was not a comfortable race for her because of the rust which she describes and she could even be seen tapping her shoulders after the race.

"My shoulders felt a little tight while I was running, so I was trying to keep focused, tried not to hit any hurdles and just execute as best as I could," she explained. "I recently got an ankle injury at the National Trials, so with joint injury, it's going to be very bad because it's cold and your ankles are hard to get warm and I also have a knee injury. So today is better and I'm grateful for that because if it was weather like yesterday, it would've been much harder for me to endure, with the cold weather.

Thompson takes to her starting block, along with Jamaican teammate Megan Tapper, in the 100m hurdles final today at 4:45 p.m.