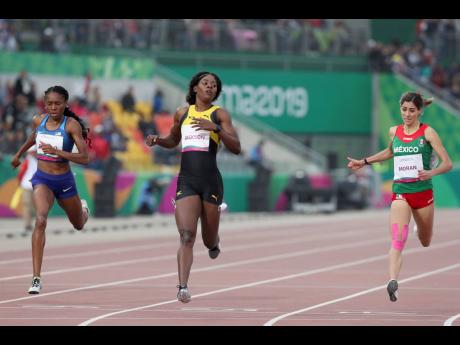 Shericka Jackson of Jamaica (centre) wins the gold medal in the women’s 400m at the Pan American Games in Lima, Peru, yesterday.

Despite talk of a potential showdown between Jamaican Shericka Jackson and Bahamian Shaunae Miller-Uibo in the final of the 400m sprint at the IAAF World Championships in Doha, Qatar next month, Jackson said she's not going to spend any of her time thinking about what her rivals are doing in the lead-up.

Jackson won gold over the same distance here at the Pan American Games yesterday in a time of 50.73 seconds, ahead of Mexico's Paola Moran (51.02) and Courtney Okolo (51.22), but said that she is just there to compete and get in the best condition for Doha, but not at the games with an intent to send a message to rivals.

"The thing for me is just to focus on Shericka Jackson," she said. "There is no sending no messages or anything. I'm just focused on me and how best I can reach my goals. I don't target any rivals. I have too much to work on for myself to be picking battles. You're going to a Championships. Anybody can just show up and I can't say I'm just focusing on one person because there are a lot of talents competing."

Jackson, though, thought her race could have been better, but given the cold weather, she is pleased with the time she ran.

"There was always gonna be mistakes," she said. "I don't think I executed as well as I wanted to, but tonight, 50.7 is really good. So I'm grateful, I'm glad I finished injury-free and I'm ready for the 4x400m.

"Yesterday (Wednesday) was a blowout. I wanted a blowout knowing my last race was in London (at the Diamond League last month). Today, I came back and I think I executed to the best of my abilities so I'm just happy I got the win."