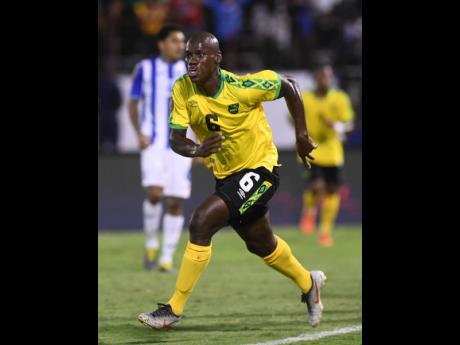 Goals from Alvas Powell in the 14th and 26th minutes, and Dever Orgill in the 43rd and 54th minutes, secured the win for the Jamaicans, who move to six points from two games in the four-team group.

Guyana remain in second spot on three points, same as Antigua and Barbuda who edged Aruba, still without any points, 2-1.

It was total domination from the Jamaicans who went about their business in an all-out attacking mode from the first whistle, and the ever-overlapping defender Alvas Powell out sped his marker and fired a low stinging shot which eluded goalkeeper Akel Clarke for the opening goal.

Twelve minutes later the Boyz were on the move once again and this time, Powell played a delightful one-two with striker Shamar Nicholson, who played the ball inside the area for Powell to round Clarke and slot home into an empty net.

With the stuffing knocked out of the home team, the Reggae Boyz were not about to let up on their relentless attacking pressure, and they would get a third goal just before the half.

Left-sided defender Kemar 'Taxi' Lawrence made an overlapping run and whipped a cross inside for Nicholson to lay off to an ever-present Orgill, who riffled his shot low and hard past Clarke to give the Boyz a three-goal cushion heading in the half.

The writing was then put on the wall in the 54th minute, as Orgill finished off a rebound off goalkeeper Clarke, who made the initial save following a rasping shot from Nicholson.

It was Jamaica's fifth win over Guyana. They will next be in action both home and away against Aruba next month.